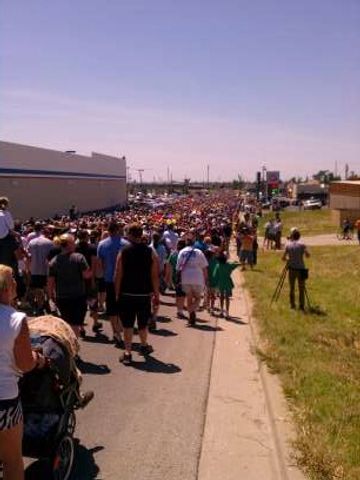 JOPLIN (AP) - Residents marking the anniversary of the deadly Joplin tornado are marching in a somber procession along the path of the twister.

A 4-mile unity walk through some of the city's hardest hit neighborhoods is under way in neighboring Duquesne, where more than one-fourth of the community's 750 homes were destroyed and nine people died.

The march will continue into Joplin and past a Wal-Mart where three people died but 200 survived the storm by huddling together in break rooms, bathrooms and other safe zones. The march ends with a moment of silence at Cunningham Park at 5:41 p.m., the precise time when the EF-5 tornado packing 200 mph winds hit the city.

The park is near the hollowed-out shell of St. John's hospital, which was destroyed in the storm.

KOMU 8 has reports attending the rally, you can view photos on Twitter here and you can watch a short video of the scene here.

Joplin Community Comes Together on Anniversary of Deadly Twister