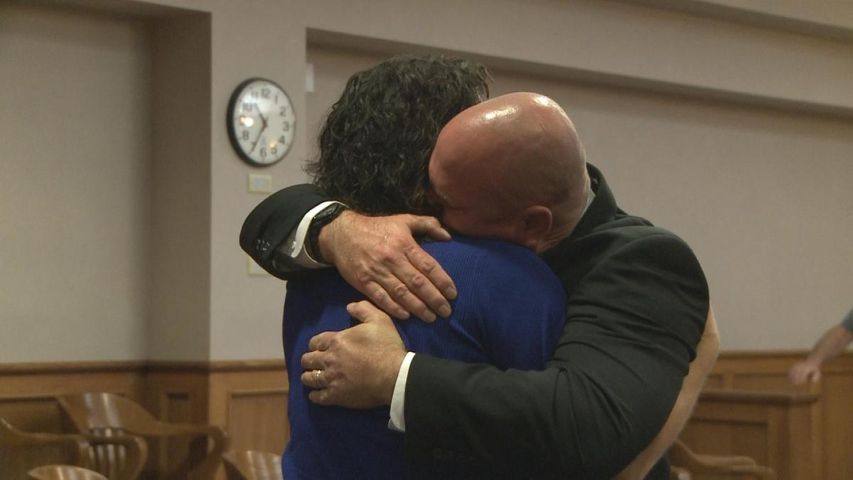 While the court trial lasted a day and a half, it didn't take England long to make her decision. She acquitted Sanders of the assault charge just minutes after the defense and prosecution finished their closing arguments, which sent a wave of emotion into the courtroom.

Just as quickly as the judge made her decision, tears started to fall. Sanders and his wife Amy hugged each other before embracing other family members and supporters.

"I did nothing wrong," Sanders said. "It's been proven now in court of law. I've been unconcerned except for the time period that it's taken since we took off."

The push occurred in August 2011 and shortly after the police department fired Sanders. Around a year later in August 2012, the state charged him with third degree assault. Flash forward to 2013, and England acquitted him for the crime.

On the final day of Rob Sanders' court trial, three witnesses took the stand including Sanders. The defense also called Lt. Christopher Kelley and Sgt. Chad Craig with the Columbia Police Department. Kelley served as the lieutenant over the night shift when Sanders was employed. He concurred with the investigation of the incident done by the police department, which found Sanders had followed all policies and procedures.

Craig serves as the sergeant of the training and recruiting unit and is the lead trainer of defense tactics. The defense and prosecution questioned Craig about the use of force allowed within the department's policies and how officers are trained.

Craig explained officers are to control the situation as quickly as possible with minimal risk. He added it is wrong for officers to purposefully use force without cause. Craig called Sanders shoving Baker something between a strike and a push. He said Sanders acted within his training when it came to the situation with Baker.

"It's the only way they could testify because it's exactly what happened," Sanders said. "So, this was not a surprise to me because I've known this for two years."

The state argued Sanders recklessly injured inmate Kenneth Baker while he was calm in his cell just asking for water to wash pepper spray out of his eyes. The defense said Sanders followed the police department's policies and didn't intend to hurt Baker.

"In this case, based on the video, the public deserved a trial. All the people interested had a public trial and the evidence was presented and consisted of the video tape. The judge made her decision and we accept that decision," Richardson said.

Sanders' shove cost him his job, and now with the assault charge out of the way, he said he hopes to get back in uniform.

"Based on the evidence and his actions, there's no reason not to reinstate him. He was improperly removed from his position and we're confident he will be reinstated with back pay and benefits," said Dale Roberts with the Columbia Police Officers Association.

"The legal system might be slower, however, it is just and justice will be had," Sanders said.

The next step for Sanders in getting his job back, is to take the issue to the police personnel board. He also wants to get his dog Fano back to work.

KOMU 8 News reached out Chief Ken Burton's office Tuesday afternoon and is waiting for a comment regarding the case.