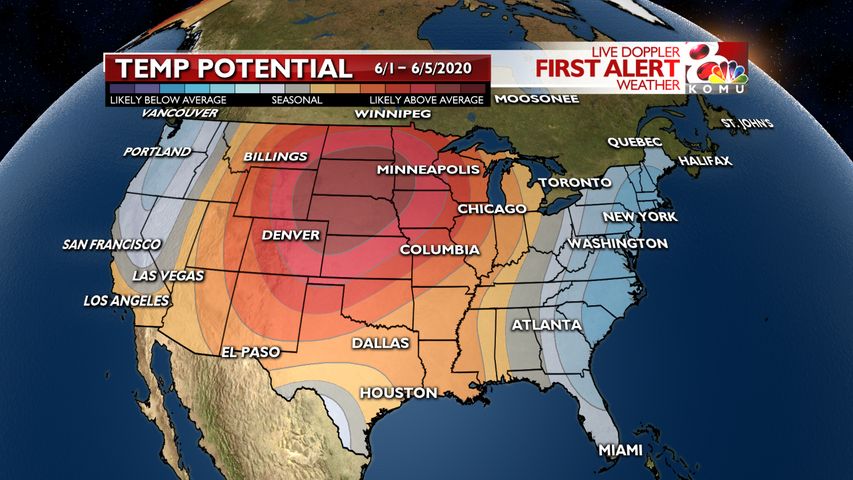 COLUMBIA – The messy weather pattern we’ve been in is about to head east and we’ll be left with cooler temperatures for the weekend with highs in the middle to upper 70s, seasonal for the end of May. However, as June begins we are anticipating a warm and mostly dry high pressure system to overspread the central United States.

As we round out the last week of May we’ll see an end to what we in meteorology call an Omega Blocking Pattern. This is when the shape of an Omega (Ω) is seen on upper atmospheric pressure maps due to pressure differences.

In the middle of the Omega is a large high pressure system which generally has warm and drier conditions under it.

Overall, this pattern can be difficult to break and can lead to droughts and flooding alike, depending on where you are under the Omega Block.

A seemingly dominant high pressure system is expected to push out from Mexico this weekend and enter to southwestern United States. This will bring hot temperatures with it.

By the start of the new week, and therefore the start of June seeing as the new month kicks off on Monday, this warm high pressure will push into the Rocky Mountains.

We are more than a week out from this happening so of course things may change, but as always, since my confidence is high enough in this possibility I am passing along this in-depth information to you. It’s part of our First Alert promise at KOMU 8. When we have confidence in a weather system, you’ll be the first to know.

Be sure to download the KOMU 8 Weather App for more First Alert information such as this.