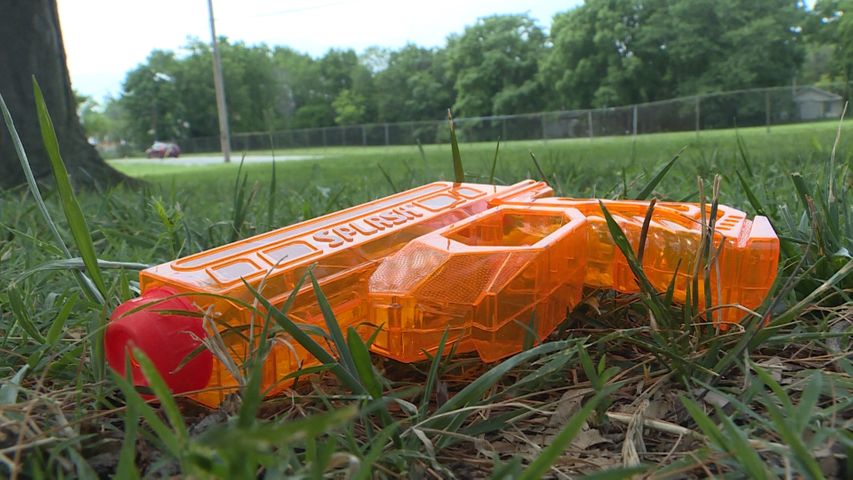 COLUMBIA - The organizer of a water gun fight says he wanted to address a serious issue in a fun way - gun violence.

Akil Hutchins hosted the "Water Guns Up, Guns Down" event on June 19, known as Juneteenth, which many black people consider a celebration of emancipation and independence.

"I hope that we all can come together, have a great time and next time not even taking it to that level, just talk it out," he said.

Hutchins said the organizers decided to choose the Juneteenth celebration as a date for the water battle event for a few reasons.

"One movement is about living your independent life, and the other is just taking it away from you and taking away the opportunity to grow," he said.

Caleb Wright, a participant, said he hopes this is also an opportunity for kids to learn about Juneteenth.

"This is a very important part of teaching kids not only that you can play safe outdoors and have a good time, but also to bring awareness and enlightenment about Juneteenth and what it should mean to our people," Wright said. "I've always known about it but this is the first we've actually been able to create an event around it. So it means a lot to me."

Na-Keysha Berry, an organizer of the event, says they wanted to create something special on this day.

"Something special that would speak to the community and work to bring us all together in an effort to stop gun violence," she said.

Hutchins said the event is meant to raise awareness on illegal use of firearms, the need for proper training and strategies for deescalating conflicts.

"We look at weapons like as toys, which is unfortunate," he said. "A weapon should be used as a tool rather than to play with, to pull out, to show off."

Hutchins' cousin was killed by a gun, and the loss impacted Hutchins' life.

"Just being a nine-year-old, having a PTSD of just hearing somebody losing somebody else because of something, that can be a trigger," he said.

Hutchins said, even if he weren't affected by gun violence, he would have organized the event.

"There's a lot of going on in the cities surrounding us - Kansas City, St. Louis, Chicago, the number of deaths that are happening because of the gun violence," he said. "It's just senseless violence."

Wright has lived in Columbia his whole life, and said he thinks this is a perfect place for this movement.

"Columbia is super diverse. It's always been a melting pot ever since I was a kid, ever since I can remember," Wright said.

Hutchins said he thinks this event will encourage people to respect and communicate with those around them.

"That's one of the big things, that we're absolutely a community and we might not like everybody in your community, that's just how it goes, but there's no need to resort to violence," Hutchins said.

Wright said although it's too early to make plans, they hope to make this water gun fight a part of their annual Juneteenth celebration.