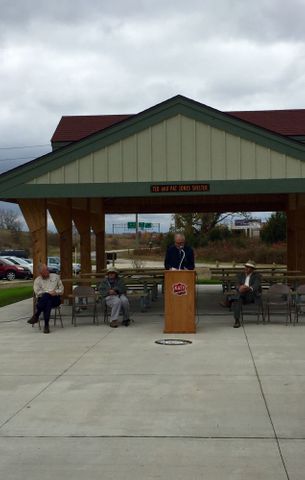 The new shelter is located at the North Jefferson trail head and cost less than $50,000.

Construction for the shelter started in June 2015. The shelter resembles a train depot to honor the trail's previous purpose.

Bill Bryan, director of Missouri State Parks, said the new shelter is unique compared to other shelters on the trail.

"Because this is one of the busiest trail heads on the Katy Trail and its connection to the city, we thought this was a good place to have a pavilion like this," Bryan said. "Families and friends can get together and enjoy a bike ride and a picnic."

Bryan said the new shelter is important because of the partners that came together to fund the shelter.

"Edward Jones company donated about 30 thousand dollars to the project, we had donations from the Conservation Federation of Missouri, the Heritage Foundation Trust," Bryan said. "I think it's important to us because we had great partners who came together and raised money and were generous to share it with others."

Though her name is now engraved on a picnic shelter forever, Bryan said Pat Jones is accepting the dedication modestly.

"I think she has great satisfaction of being out at events like this and seeing how much people enjoy the Katy Trail," Bryan said. "It's not about her name being on the shelter, it's about other people enjoying what she loves."

The Katy Trail is built on the former Missouri-Kansas-Texas railroad, which ceased operations in 1986. The 240-mile trail generates about $18.5 million annually.