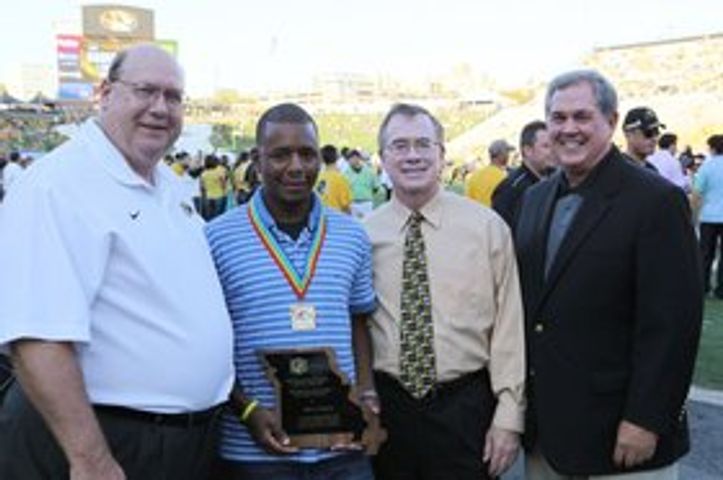 COLUMBIA - On Tuesday, Ken Ash was presented with the 2011 Don Faurot Sportsperson of the Year Award for his long-long career promoting sports and health fitness in Columbia and the state of Missouri as a coach, teacher and now the execuitve director of the Show-Me State Games.

Bill Clark, who nominated Ash, describes him as "truly a part of the central Missouri landscape."

"He spans a time when he was the best kid pitcher in town to being a star at Hickman, came back to coach very successfully at Hickman, did an outstanding job at Central Methodist and was [Gary] Filbert's right-hand man for 15 years before becoming the head guy," said Clark. "Our Show-Me State Games are in good hands."

Each year, the Kiwanis Club of Columbia recognizes an individual who has contributed greatly to Columbia's sporting community, exudes sportsmanship, acts as a positive role model and promotes teamwork, determination, physical fitness and self-confidence.

"I am humbled and honored to be given this award and join the company of so many of Columbia's great sports advocates who have also received this award," said Ash.

In 1989, Ash joined the Show-Me State Games. He worked alongside Filbert as associate director before becoming executive director upon Filbert's retirement in 2002. Ash has continued the strong success of the games, adding new events and ensuring the games remain the largest state games in the nation.

Before joining the Show-Me State Games, Ash demonstrated his passion for athletics by teaching and coaching. During his five years as Hickman's head basketball coach, his team won five Central Missouri Conference titles and made it to the state tournament twice. He went on to Central Methodist College, winning the Heart of America basketball title three times. Ash's coaching career ended at Pittsburgh State University in Kansas, after he left to return to Columbia for family reasons.