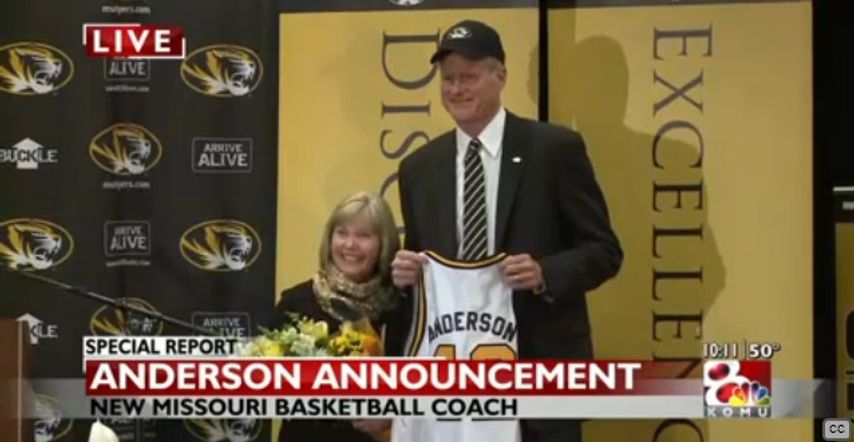 COLUMBIA - The University of Missouri has hired Kim Anderson to be the new men's head basketball coach.

Anderson will be the 18th men's basketball coach in school history. He recently coached the University of Central Missouri to a 2014 Division II national championship. He also played basketball at Missouri from 1973-1977 as well as coached as an assistant under former Tiger coach Norm Stewart from 1991-1999.

UCM Athletic Director Jerry Hughes said many are sad to see him go, but are excited that he landed a job at his alma mater.

In a news release, Missouri Athletic Director Mike Alden said the athletic program is excited to have Anderson on board, especially since he has a Missouri background.

"We are pleased and excited to have Kim Anderson leading our program," Alden said. "He's a man of great character, integrity and respect. He has demonstrated the ability to mentor young men on and off the court, academically and socially. He's a proven winner on all levels, and he's built tremendous relationships around the country in the basketball community, which assists greatly with recruiting and other important aspects for a program. Lastly, the fact that he's a Missouri Tiger at heart is important, he is committed to Mizzou and has a passion to build a program of which all Tiger fans will be proud."

UCM guard Jon Gilliam said, "he's like a father figure, you know, we're 18, 19, 20, 21 years old so you know we're still looking to figure out things in life and he's there more than just a coach that you see sometimes."

Earlier in the day, University of Missouri System President Tim Wolfe closed a meeting of the UM Board of Curators shortly after the board motioned it would go into executive session.

Once the executive session started, media members were required to leave.

Wolfe was present for the meeting as well as UM system general counsel Steve Owens. The meeting was conducted with the curators via a conference call. Seven of the eight curators answered during the roll call to show they were present.

The meeting adjourned at 2:20 p.m. The curators and president did not release a statement or answer any media questions.

There will be a news conference to introduce Kim Anderson as the new Missouri men's basketball coach on Tuesday at 10 a.m.