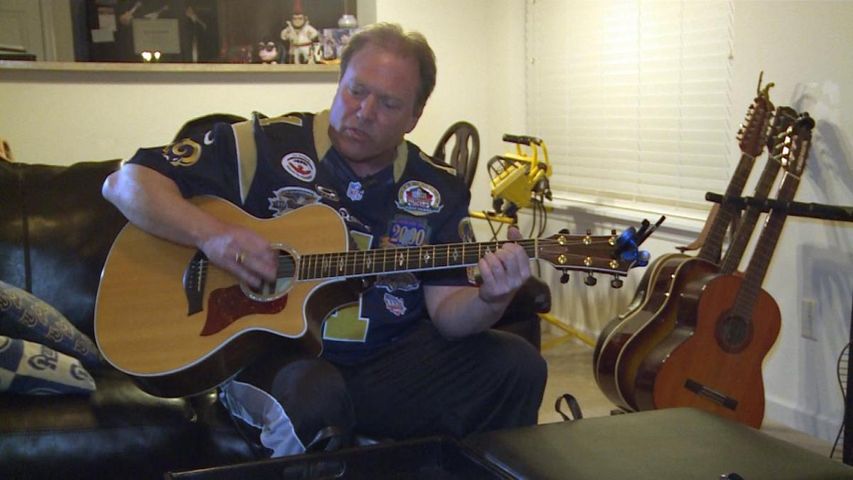 ST. LOUIS - Elvis Presley is the undisputed King of Rock and Roll. The legacy he left behind has helped one Rams fan create a character worthy of the Professional Football Ultimate's Fan Association.

"I got my tickets originally in 1997 after they had been here for a couple seasons and it just took root," King said. "And then when the greatest show on turf hit, everything really took off."

This season, however, King has decided not to buy season tickets from the Rams for the first time in 20 years.

"This year, it's a matter of ethics," King said. "If Stan isn't going to tell us what he's going to do with the team, there's no commitment on his part. In my professional life, if I would make that kind of decision, I would lose my job. I'll still be going to the games, but I am not going to be buying my season tickets from him. I can buy tickets off StubHub for half what I pay Stan every year and still go to the game and get better seats."

Even though he won't commit to buying tickets from Kroenke, King said he understands why Kroenke hasn't spoken to the public since 2012.

"Well, to him, it's a game," King said. "It's playing poker is what it is. And he's not going to show his hand. He's obviously a very astute businessman, and he's worth ten billions dollars. It's strictly a business deal to him, just like everything else he deals with. Loyalty doesn't matter or anything like that. This is all about money."

There is still a lot to be seen in regards to the St. Louis Rams' future, but King said he sees two men as the main stakeholders.

"I think everybody's guess is nothing more than speculation," King said. "I do think it's down to two people. It's down to Roger Goodell--representative of the NFL ownership--and Stan Kroenke. If it was up to Stan, he'd move tomorrow."

Before King began dressing like Elvis, he started out painting his face while wearing a golden lemay cape and gold horns along with some of his coworkers.

"After about seven years of that, I decided I was going to switch over to Elvis because I'm King Ram, Elvis is the king," King said. "I kind of got tired of the facepaint, and that's when I' went Elvis. I've done whole Elvis concerts before, playing with a band behind me."

Not only does King rock an Elvis look, he also represents the Rams at the NFL Hall of Fame in the Professional Football Ultimate's Fan Association (PFUFA) in Canton, Ohio. In 2011, he was inducted into the PFUFA, as it is now called, which is held on the Sunday morning of Hall of Fame week.

"That is such a fun week to be a part of," King said. "We are in the parade there in Canton on Hall of Fame weekend. We also visit children in the hospital up there. We have several events for underprivileged children. That's my favorite part of the week."

King said he loves dressing up and cheering on the Rams every Sunday but enjoys making a difference in kids' lives.

"One year, we were in Canton and were visiting the kids in the hospital," King said. "We went into a room, and I was singing and playing for this girl. We left and started walking down the hallway before they came back and said, ‘Hey, Elvis can you come back here and play for this girl some more?' And I said, ‘Yeah, sure.' I went back in there and played about three songs for her. When I was leaving, they thanked me and told me she had terminal cancer. And they said it was the first time they'd seen her smile in three or four months. You don't think you can make a difference in peoples' lives, but it makes it worth it when you can."