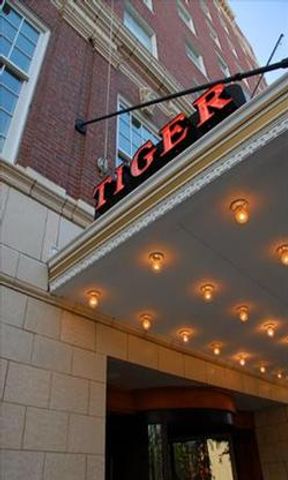 COLUMBIA - The Tiger Hotel in Downtown Columbia just finished a two-year renovation, making it mid-Missouri's only four-star hotel. And according to a deal with the City of Columbia, the owners will have some help from taxpayers paying for that restoration.

The city froze the Tiger Hotel's property and sales tax as part of tax increment financing (TIF). The city approved the $1.785 million TIF project in 2009 and construction began in 2011. A TIF is basically a plan that allows a taxpayer to forego paying some taxes. In the hotel's case, when its reassessed value and property taxes go up, it gets the increase refunded. When sales tax revenues go up, the hotel keeps half the additional money and the city and county get the rest. Now that the renovations are complete, it's time for the hotel to begin cashing in on TIF money.

Tiger Hotel CEO Glyn Laverick gave KOMU 8 News an exclusive tour of the Tiger Hotel Tuesday, the day of the city's deadline to complete renovations. Laverick said the renovations are complete and that the city's investment is worthwhile with benefits to both the community and its taxpayers.

As part of the tour, Laverick took KOMU 8 News to the top floor of the 10-story building. In a corner room suite, there are four sets of windows that overlook downtown Columbia, providing a view directly down Eighth street to parts of the University of Missouri campus.

"It's a really exciting space because it has one of the greatest views in terms of hotels in Columbia," Laverick said.

Renovations began in 2009 and were originally projected to cost $8.9 million, but Laverick said he surpassed that amount by almost a half million dollars. On the outside of the hotel, Laverick said he spent about $15,000 installing a heated sidewalk that can melt snow and dry the ground at the flip of a switch. He said it's all for the sake of making the hotel perfect. "And that just shows that we want to go the extra level and do it absolutely right and get it done right the first way," he said.

But if you choose to stay at the upscale hotel, remember you'll be paying a four-star price. On a Monday in November, Priceline estimates the cheapest room is $159. The ninth-floor executive suite with the glamorous view would cost $249. Booking a room for home football weekends in the fall is every pricier, almost double the regular price for most rooms. For the Texas A&M home closer in November, the cheapest room is $300 and the most expensive is $500, according to Priceline.

Laverick said the overnight experience is unrivaled in town. "It's a spectacular property and I think anybody that goes here and stays here knows that it will be here as a landmark for decades to come," Laverick said.

Columbia Assistant City Manager Tony St. Romaine said the city will soon begin the lengthy paperwork process to begin dispersing TIF money. He said the property will be reassessed in the next two to three months and then the city will issue TIF notes on the project. He said there is no liability for the city to pay the note until an increment is generated. The $1.785 million TIF will be paid out over the next 21 years.

In November, KOMU 8 News looked into several of Laverick's previous projects. From Marshall, Missouri to Canada, Laverick left similar projects to the Tiger Hotel before they were completed. He promoted concerts and attempted to restore old theaters, but some of his ventures proved unsuccessful.

KOMU 8 News asked Laverick Tuesday if he will be CEO of the Tiger Hotel in five years. "Absolutely," he said. "It's been a great project. I've been here three years now and its become a home, you know, it really has," Laverick said.

The building is also home to The Velvet Cupcake and the V2 Nightclub. Laverick said he hopes to open a new upscale restaurant in the hotel this summer.