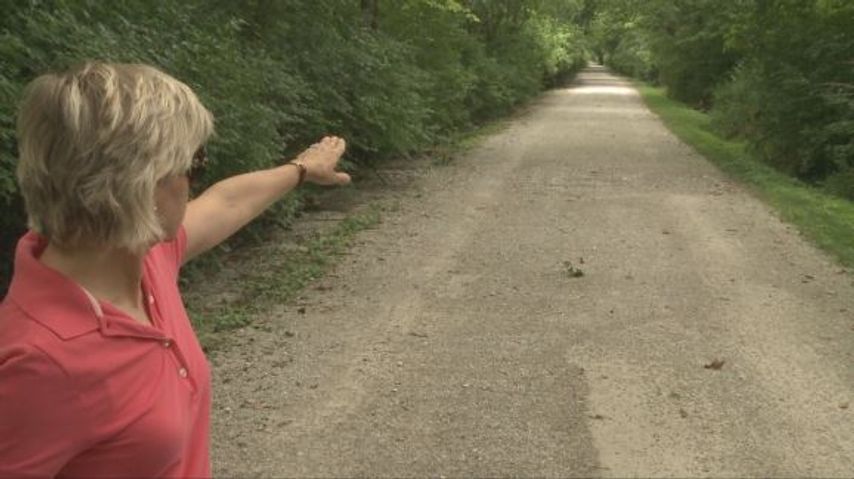 COLUMBIA - Police are still searching for the suspect who assaulted a woman on the MKT Trail near the Forum Blvd. access in Columbia on Thursday night.

KOMU 8 exclusively spoke with witness Suzanne King about the attack. King called 9-1-1 at 7:58 p.m., and stayed on the line with the dispatch operator for 17 minutes until the authorities arrived at the scene.

King said she was bicycling east on the trail and had just gotten to the entrance way to the Stephen's Lake Path when she heard a woman scream.

As King peddled faster toward the screams, she said she saw a man running east down the trail. She said the victim was obviously in distress.

"She basically had gashes all over her face, deep gashes, she was bleeding, finally when she calmed down enough and through the 911 operator we managed to ask more questions, she said that she didn’t know the man."

King said she was originally alone but as she stopped to attend to the woman, other people started to show up to help.

"Another man on a bike stoped by and I mentioned that this guy had run down the trail that direction going east, and he was going to go down there and try to see if he could find out who that was," she said.

King said she did not get a close look at the attacker.

"So I never got a very close glimpse of him - I saw a silhouette, I saw that he had long pants on I couldn’t even tell the color of his hair or any facial features."

As an avid user of trail, King said she will now think twice before using it alone.

"I'm a person that uses the trail on almost a daily basis, and being that this section of the trail is really in neighborhoods, it really surprised me that something that like would happen here it was still daylight," she said.

According to police, the 26-year-old woman was attacked while walking on the trail and struck several times with an object before the suspect fled.

King said, "She was a very healthy looking person who looked like she would have been able to protect herself some, but even she was not able to prevent want happened."

Police are still looking for the object used in the assault. A K-9 unit helped search for the suspect when officers arrived, but police say the search was unsuccessful. The suspect is still at large.

The police said the victim was taken to the hospital with non-life-threatening injuries.

Police are urging people on the trail to stay alert and call CrimeStoppers at (573) 875-TIPS if anyone has information on the assault.