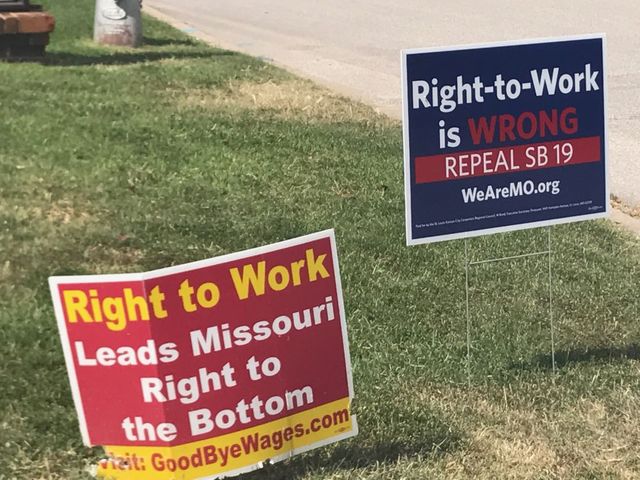 COLUMBIA - On Monday, more than 30 people knocked on doors to collect signatures to try an repeal Right to Work in Missouri. We Are MO and Susan McClintin hosted the petition sign in at Laborers Local 955 Labor Union.

One union member, Curt Cummingham, said Right to Work should be left up to Missouri voters.

“Our mission is to gather signatures through the way of petition to allow the people of the state of Missouri to vote on the Right to Work instead of just a few people in Jeff City,” Cummingham said.

Union members went door to door and gathered signatures in public places. Cunningham said they are getting people to support the petition so others know the union is active and it believes the matter should be left up to the voters in Missouri.

“Most of us go out and canvas where people gather,”Cumminham said. “There was three of us union members at the farmers market last weekend. Other people had different places around Columbia. I personally have been going door to door, so that’s how we get signatures.”

Cunningham said repealing Right to Work is important for workers.

“We believe in collective bargaining, and we don’t believe it allows for working people to have better wages, better benefits and on the job safety,” Cummingham said.

President and CEO of Associated Industries of Missouri Ray McCarthy said when Right to Work goes into effect in August it will make labor unions worker harder for workers.

“What we believe is the unions will have to prove to the workers that they are actually doing work on their behalf in order to make them want to be a part of the union and pay the union dues,” McCarthy said.

McCarthy said without Right to Work Missouri workers vote on a whether they want a union. If 51 percent is in favor of the union, then every worker must pay.

Once Right to Work goes into effect on August 28th, workers will still be able to join unions.

“We see many major unions, primarily in the trains and other places where they really do have good benefits coming from the union,” McCarthy said. “We don’t see it impacting those unions at all. But we do think that some of the other unions who are not doing much for their workers will have to prove to those workers that they are actually doing something for them so they will actually pay those union dues.”

McCarty said that Right to Work will also bring companies and jobs to Missouri that previously wouldn’t consider Missouri.

“It allows Missouri to be considered as a location for companies that require a Right to Work state, and it does require unions to work harder for their union members to want to pay them dues and be members of the union,” McCarty said.

McCarthy added the most important reason he supports Right to Work is the potential employment opportunities that will come to Missouri.

“The advantage to that is that some companies when they are locating their new jobs, new processes and new facilities, some of them will only locate in Right to Work states. And since Missouri is not a Right to Work state and we don’t qualify.”

McCarthy said other states do qualify because they are already Right to Work states.