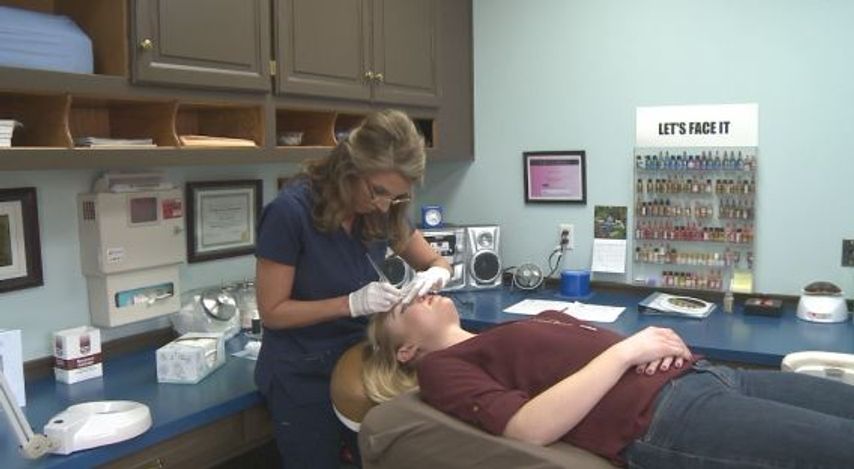 KANSAS CITY - In Missouri, there are no regulations for applying permanent makeup: the process using a hand held blade to apply ink to mimic eyeliner, lipstick, eyeshadow or eyebrow pencil.

Tina Burch at Let’s Face It permanent makeup clinic in Kansas City wants people to understand the lasting impact of the process, known as microblading. In Missouri law, microblading is considered “semi-permanent” and is not regulated by the Office of Tattooing, Body Piercing and Branding.

“Microblading doesn’t fade completely away, but it does have a tendency to lighten up to the point where you need to touch it up,” Burch said. “People are kind of playing on words and saying that, because it fades, it’s semi-permanent, which isn’t necessarily true. If someone were to microblade and actually use body tattoo ink, then it would be just as permanent as any other body tattoo.”

According to the law, anyone who has complied with certain safety and sanitation requirements can microblade. Without proper training, Burch said, people who have unregulated microblading procedures are at risk.

“Anything that you accidentally happen to poke the blade with will penetrate not just the outer layer the epidermis, but the dermis, which is where you actually have to put the pigment for it to even stay in the skin,” she said. “It’s definitely a safety issue.”

Burch said she gets calls from people who have had procedures done at makeshift microblading shops around the state.

“Some of them have been in basements, kitchen tables, you name it, just all kinds of places that are popping up and doing microblading right now,” she said. “I’ve been called and I’ve seen eyebrows where they’re a half an inch different, totally different shapes and colors."

Sometimes the damage is greater than skin-deep.

“The worst scenarios I’ve heard are people who end up with infection,” Burch said. “If you do get hepatitis from unsterile instrument, you may not even know it for years down the road.”

Burch is trying to change the law to include microblading in Missouri’s definition of a tattoo. Rep. Jim Neely (R-Cameron) is sponsoring HB 877, which, if passed, would redefine tattooing in the state.

Neely said the bill is meant to protect public safety.

“Well you’re certainly invading the skin in this process, so if we’re doing that and if we’re not using proper sterile techniques, I think I'd have some concerns from a public perspective,” he said. “The emphasis of the legislation is to make sure that it’s a safe procedure.”

The bill has been presented and is awaiting a hearing.

“Certainly if tattooing is regulated, certainly microblading needs to be looked at in the same light,” Neely said.

At Iron Tiger Tattoo in Columbia, owner Gabe Garcia has some concerns about the bill’s definition.

“Somebody who does tattoos doesn’t wanna necessarily do eyebrows and someone who does only eyebrows doesn’t have any business having a license saying you can tattoo the general public,” Garcia said.

He said people interested in microblading procedures should ask for credentials.

First-time Let’s Face It client Emily Hale said it was important for her to know her eyebrows were microbladed by a professional.

“It was a little nerve wracking, but I’m really glad that Tina has her license in doing this just so I know what I’m getting done is going to be professionally done,” Hale said.

Burch said she has learned how to make her clients, including Hale, comfortable during microblading.

Hale said, “It was actually more painful to get my eyebrows plucked than the actual procedure itself.”

As a natural blond, Hale said she wanted to have her eyebrows microbladed darker to save time in the morning when putting on makeup.

Although the state does not regulate microblading, Burch wants all people interested in microblading procedures to be as satisfied as Hale. She recommends prior research for quality results.

“Do your homework,” Burch said. “Make sure that the person is actually licensed, you want to see their license, you want to ask them where they got their training.”

The following is found on the Office of Tattooing, Body Piercing and Branding website:

Microblading in Missouri from Emma Rechenberg on Vimeo.

Rep. Jim Neely has introduced the bill in the House. The bill is now awaiting a hearing.