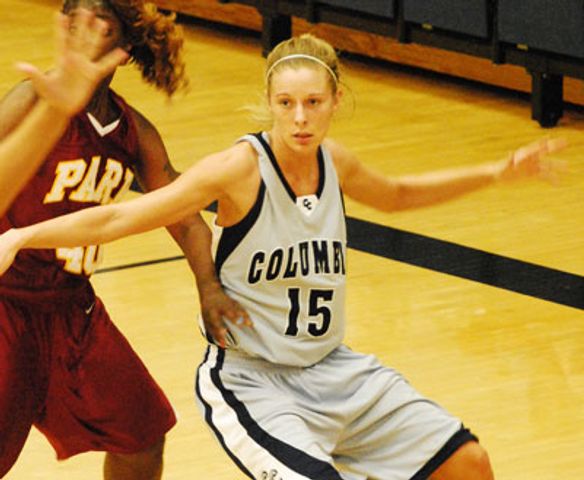 COLUMBIA -- The Columbia College women's basketball team secured a crucial victory Saturday in American Midwest Conference (AMC) play, defeating William Woods University by a final score of 76-66. The teams squared off earlier this season, with the Owls coming out on top 69-64. Columbia improves to 18-8 on the season and 8-2 versus conference foes. The loss drops the Owls to 17-8 overall and 7-3 in the AMC.

With just four conference contests left this season, the Lady Cougars are in the top spot, while the Owls and the Eagles of Williams Baptist follow closely behind in a tie for second.

The Lady Cougars came out cold, falling behind 11-2 in the opening minutes, but back-to-back three's and five straight points by Ashley Fisher would put Columbia back in the game, trailing 20-18. After shooting just 33 percent in the first half, the Lady Cougars trailed 39-33 at the break.

Julie Teeple and Heather English kept the Lady Cougars within striking distance early in the second half, as the duo combined for all 14 of Columbia's points in the first 12 minutes of play. Trailing by eight, the Lady Cougars went on a 20-3 run that gave them a commanding lead with just four minutes to go in the ballgame.

However, the Owls hung on to the very end, bringing the game to within five, but they would get no closer, as Columbia shot 17-for-17 from the charity stripe in the second half and walked away with the 10-point win.

Sharron Andrews led the Owls with 18 points and eight rebounds.

The Lady Cougars return to the hardwood on Thursday, February 16th when they host Missouri Baptist University. Game time is set for 5:30 P.M. in the Arena of Southwell Complex.