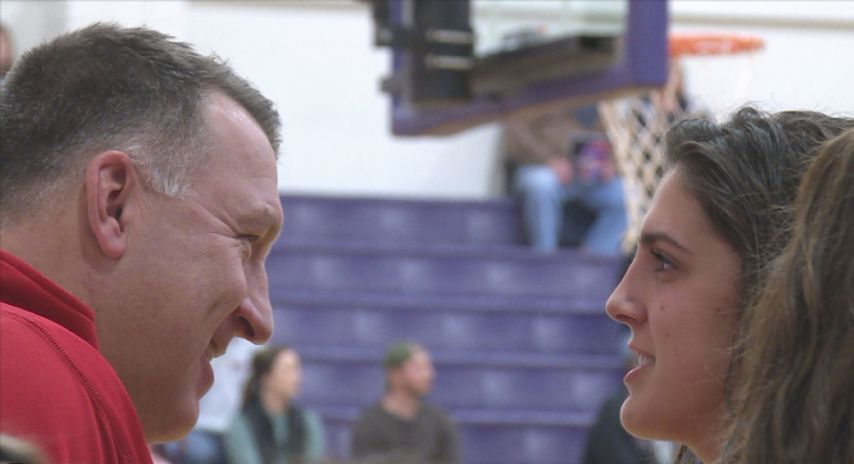 JEFFERSON CITY - The Jefferson City Lady Jays are at the tail end of a program-defining season.

They nearly went undefeated, dropping their second-to-last game of the regular season to Incarnate Word Academy in St. Louis. They now sit at 28-1 and just got a berth to the Class 5 Final Four, two wins from a state championship.

"We're all super close, we have some sisters on the team, me included," forward Micah Linthacum said. Micah and her younger sister Sarah share a special bond, but someone who's not on the official roster has a much bigger influence on her.

"He's been such a big influence on my life, not just as much basketball but if anything more off the court," Micah said of her dad Larry.

They made a lot of memories together when he coached her as a kid.

"I remember one winter specifically the snow was super deep and we had a little basketball court in our backyard. We brought the snow shovels out there and worked on post-moves," Micah said. "I still remember that because it was so cold!"

"I don't know whether she'd say that was a positive experience or not but it's probably memorable because I'm thinking it was cold," Larry said about that day.

In addition to being her dad, Larry is also watching over her as the superintendent for Jefferson City Public Schools. Thankfully, he's never had to use his office to discipline her.

"That'd better not ever happen with any of my kids!" Larry said. "She does a great job in school but I know there's probably times where she could be a little more inspired."

While their time in primary education may be coming to an end, he won't have to go far to watch her play at the next level. Micah is following in her dad's footsteps and becoming a Mizzou Tiger.

"Even before I had gotten the offer, it just felt like I was going to have Coach Pingeton as my coach," Micah said.

"It's one of those things that, you know, you dream of," Larry said, who played tight end for the Missouri Football team from 1988 to 1990. "I'm just excited for her."