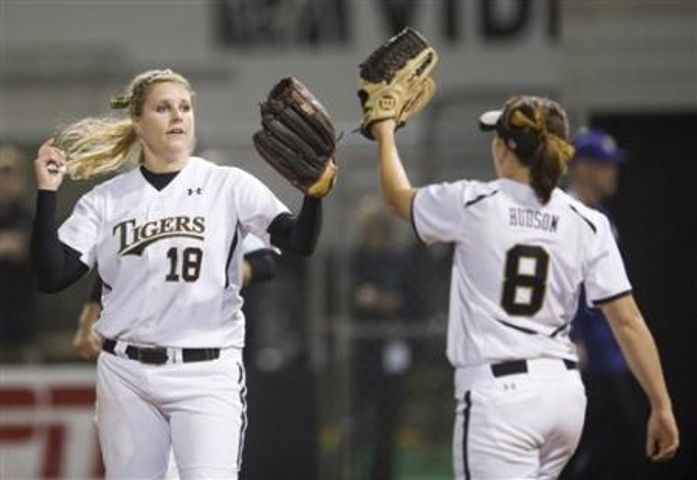 COLUMBIA - The Missouri softball team had hoped to make it to Oklahoma City this post-season. The tigers seeded sixth nationally, hosted the eleventh seeded Washington Huskies from the Pac-12. Washington pulled off the upset, sweeping Mizzou in two straight games.

Coach Ehren Earleywine and his players, including one of the great athletes to don the black and gold of the Missouri Tigers - Chelsea Thomas had an emotional post game press conference.

Head coach Ehren Earleywine said, "I didn't always show it probably or I'm not good at showing it, I'll put it that way. But I care about each of these three kids deeply and I'm going to miss them a great deal." He went on to share, "I hate it for Chelsea. I hate it for her because I felt like that; I feel like she is as good of a pitcher as there is in the country and I feel like the rest of us kind of let her down to be honest with you."

Senior pitcher Chelsea Thomas spoke, "obviously this wasn't the end result to the season that we wanted but I've tried to look back on my career the past couple of weeks... and it's been more than I could have ever expected. The opportunites I've been given and the people I've met and this University, and all the community support has been unreal, and I wouldn't -- I wouldn't pick any other place. It's just been... I'm very thankful and grateful for everyone that has helped make my career here so successful."... "Hardly anybody wanted me to play on their team and he took a chance and gave me the opportunity and I owe him forever for that. I wouldn't be here without him."

Fellow senior Nicole Hudson shared, "you know my dream from as far as I can remember was to come here to Mizzou and play softball, and 'm just incredibly blessed that I got to live that out because, how many people actually get to do that in their lives I've grown so much as a player and learned so much more about the game. I owe Coach E a lot about that. I had no idea how extensive this game was and how much there was to learn. And today, the very last day of my career, I continued to learn more and become a better player and I'm really thankful for that. nd more so the softball part of it, I'm so thankful for the relationships that I've built and the friendships that I have and the family that they've become. Cecause win or lose a softball game, that's going to be around for the rest of my life and I have the best memories that I've ever had with this team and with these girls. I'm really thankful."

Emotional comments from members of the Mizzou softball team, that really has been of the few Tiger teams to compete favorably at the national level. Mizzou had made three consecutive Women's College World Series appearances. But in the last two years, they've fallen just short, losing at home, when favored in super regional play... to LSU last year, and Washington last week.