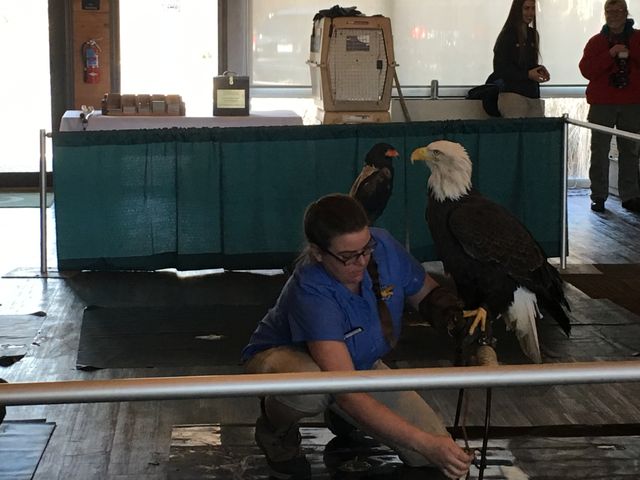 LAKE OF THE OZARKS - Hundreds came out to learn about and interact with different species of eagles and owls as part of the eighteenth annual Lake of the Ozarks Eagle Days on Saturday.

The annual event was started after the Missouri Department of Conservation was forced to reduce the number of Eagle Day programs it does across the state due to budget cuts. Michelle Cook, one of the members of the Eagle Days planning committee said the community came to bring the event back.

“The community is really what kept it going and kept it alive,” Cook said. “Several organizations gathered together and created a self-sustaining event that is funded by donations.”

When the program began 18 years ago, there was only one bald eagle on display. This weekend, there are four different species of eagles on display.

The event has also grown in size. This weekend, it has programs at multiple different locations.

In addition to the different species of eagle on display at Osage National Golf Resort, there are bald eagle and owl program at School of the Osage Heritage Elementary, and spots along the Osage River where it is possible to see wild eagle nests.

Cook said the program has come a long way in the 18 years it has been around.

“We have added programs every year,” Cook said. “We have a coloring contest, an amateur photo contest, a lot of different things that pair well with the event.”

Cook has been involved with the program since it began, and says her favorite part of the event is seeing people’s reactions.

“I just love standing in the background and watching the smiles on everyone’s face,” Cook said. “Just sitting back and watching everyone enjoying themselves is a huge thrill, and educating everyone who comes here because a lot of people do not know there is such an eagle population here in the Lake of the Ozarks.”

Eagle Days continues tomorrow from 10 a.m. to 4:30 p.m. Programs at Osage National Golf Resort start every hour on the hour and programs at School of the Osage Heritage Elementary  begins on the half hour.