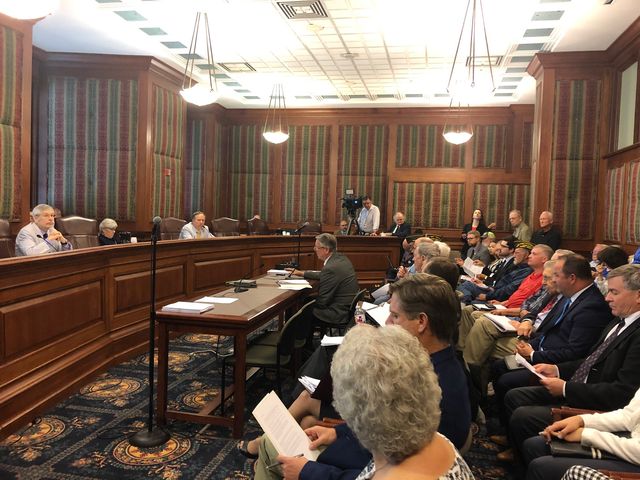 JEFFERSON CITY - Supporters and opponents of a bill that poses a significant hurdle to a proposed electric transmission line that runs through Missouri told lawmakers Wednesday why the project is harmful or beneficial.

The bill would prevent the Grain Belt Express, a transmission line that would cross 206 miles of Missouri, from using eminent domain to take property. The House passed the bill last month. A Senate committee heard it Wednesday.

"This legislation is vital to many Missourians who otherwise would be forced to allow unreasonable restrictions on their family farms, damaging the value of their land and their neighbors' property also," said bill sponsor Rep. Jim Hansen, R-Frankford.

The 780-mile transmission line would transport wind energy through Kansas, Missouri, Illinois and Indiana. It would run through Chariton, Randolph and Monroe counties in central Missouri.

In late 2018, Chicago-based Invenergy announced it was acquiring the Grain Belt Express project from Houston-based Clean Line Energy Partners. Invenergy is awaiting approval from the Public Service Commission to acquire the project.

The route is final, she said. If the land's ownership is unclear and there is no way for the company to track down the landowner, the company will look at eminent domain.

"Other than that, every single one of the landowners that are involved in this project will be approached by the company to engage in a voluntary easement negotiation," Luckey said.

Landowners groups argue the Grain Belt Express is not a public utility. They renewed their vow Wednesday to appeal to the Public Service Commission, which ruled in March the project is a public utility.

The transmission line, if built, would cross the land of Marilyn O'Bannon's parents' farm in Monroe County.

"We were all testifying today to protect our property rights, and eminent domain is a real threat," O'Bannon, a spokeswoman for the Eastern Missouri Landowners Alliance, said.

Thirty-nine Missouri cities, including Columbia, Macon, Centralia and Hermann, are set to obtain energy from the project if it were built.

"This project represents more than $12.8 million in savings for Missourians every year," said Duncan Kincheloe, president of the Missouri Joint Municipal Electric Utility Commission. "These are dollars kept from flowing out of these towns and savings to family budgets."

Presiding Ralls County Commissioner Wiley Hibbard questioned why 3,500 megawatts of power would go to other states while 500 megawatts would be made available to Missouri.

Mike Becktell, the vice president and general manager of Hubbell Power Systems in Centralia, said if the transmission line is built, Hubbell will build product for it.

"We've estimated this will add 60, 65 jobs to the Centralia area during this project," he said.

Donna Inglis, who owns a Randolph County farm in which the Grain Belt Express will cross, spoke in opposition to the bill.

"This has become such an emotional argument that it's gotten completely out of hand," she said. "I have yet to hear one person say that a highway or a railroad is beautiful. When you think of it that way, we need to look for the better good. And better good is allowing this project to go forward."

"This could be a good economic engine — not only for the consumers, businesses and customers already that are in their towns — but enable them to hopefully bring in industry, bring in jobs into our communities. And that's a really big deal for us," he said.

The bill still needs a Senate committee vote plus approval from the full Senate.

At a news conference last week, Senate Majority Caleb Rowden called the bill "a will of the caucus issue."

"I'll have my own opinion, but if there's enough folks in our caucus who want to see action taken, then we'll probably see it on the floor," Rowden, R-Columbia, said.