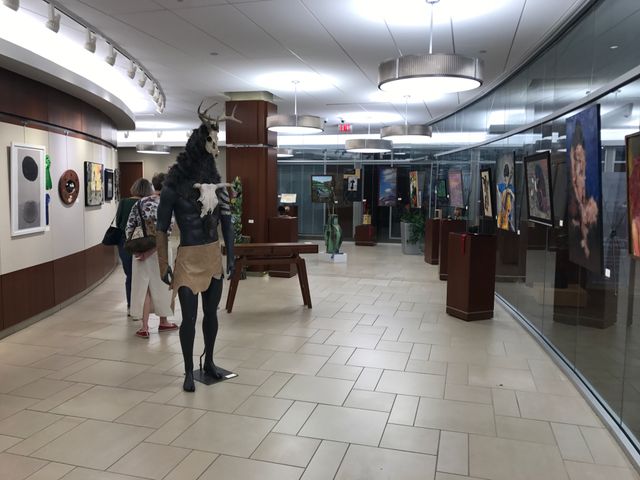 COLUMBIA - For the 58th straight year, Central Bank of Boone County and the Columbia Art League teamed up for the Boone County Art Show. The bank is completely transformed for the weekend, as the first floor becomes a gallery filled with different kinds of artwork.

"We have almost 200 works of art, which requires us to completely disassemble the whole first floor of the bank and turn it basically into an art gallery for the weekend," said Mary Wilkerson, a senior vice president at the bank. "We start on Friday taking things down. At 6 p.m. the art comes in and between six and 8 p.m. we hang it and it gets judged on Friday night before we open on Saturday."

While turning a bank into a gallery is a unique aspect of the show, artists and visitors also benefit from the fact that all pieces submitted are displayed. Most art shows are juried before displaying a selection of works that make the cut, but for this show, anyone 18 years of age or older can submit their work and have it displayed.

Diana Moxon, the executive director for the Columbia Art League, has helped put this event on for 11 years. She said that allowing all works to be displayed can help artists just starting out get some confidence.

"It’s a very non-threatening event," Moxon said. "If you’re an artist and you’re entering a work into a juried show, there’s a big chance that you might not get in. So, that fear of rejection is really significant if you’re just starting out. Shows like this, which are un-juried and un-themed, you can come along and put your work in, and you might not win an award or sell the piece, but it’s not going to get turned down and that’s a really great first step."

Moxon said she has seen this event turn people into artists that were just dabbling in art beforehand.

"Over the years that I’ve run this, a lot of artists become artists at this show because this is the first time they hang their work," she said. "Maybe they get an award, maybe somebody buys their work and it’s like this little switch changes in their brain and they suddenly go ‘I’m an artist’ and it’s really transformative for a lot of people, and that’s what’s so great about a show like this."