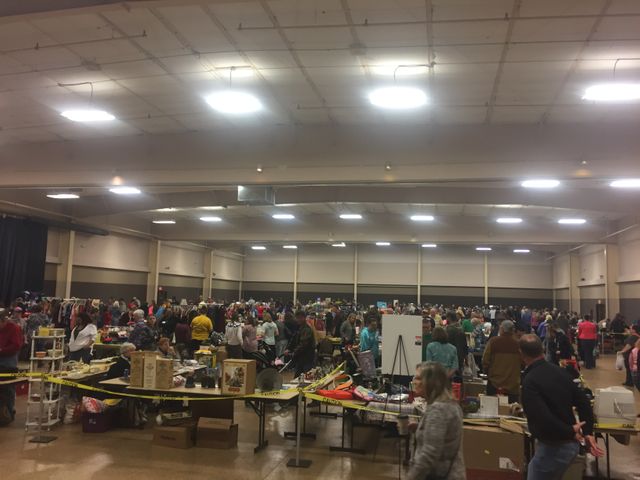 COLUMBIA - Columbia’s largest indoor garage sale brought people from far and wide with over 60 vendors in the Columbia Expo Center.

The garage sale opened its doors at just after noon on Sunday and already had a line of several hundred people waiting outside the door.

Clare Moorehead, the event’s organizer expected between 1,000 and 1,200 people to attend.

She said they take vendors on a first-come, first-serve basis, no limit on how much people can bring, it’s whatever they can fit in an 8 feet by 12 feet space and some people reserve multiple spaces.

Garage sale goer Mark Pitts has been going to the event for over 10 years now, he said this year is different.

"It's better than it has been in the past," Pitts said

There were some first-timers at the sale, too.

Vendor number 29, Sherri Helm, was a part of the garage sale for the first time this year with her husband. She said they were fulfilling a New Year's resolution.

“One of our resolutions this year, we will have been married 40 years, we were going to de-clutter," Helm said. "So, we started pulling stuff out and when I saw this advertised I thought, 'This is perfect.'”

The Helm’s plan was to sell whatever they could at the garage sale and then take the leftover items back to their house and have their own garage sale.

Just an hour into the sale, Helm told me they had about 75 percent of what they brought sold.

The garage sale is not just helping them fulfill a New Year's Resolution, it’s helping with their big summer plans, as well.

“We’re going on a cruise this year. So, we’re putting that money into our cruise fund,” Helm said.

With all of the success this year Helm is already thinking about future garage sales.

“I want to do this every year,” she said.