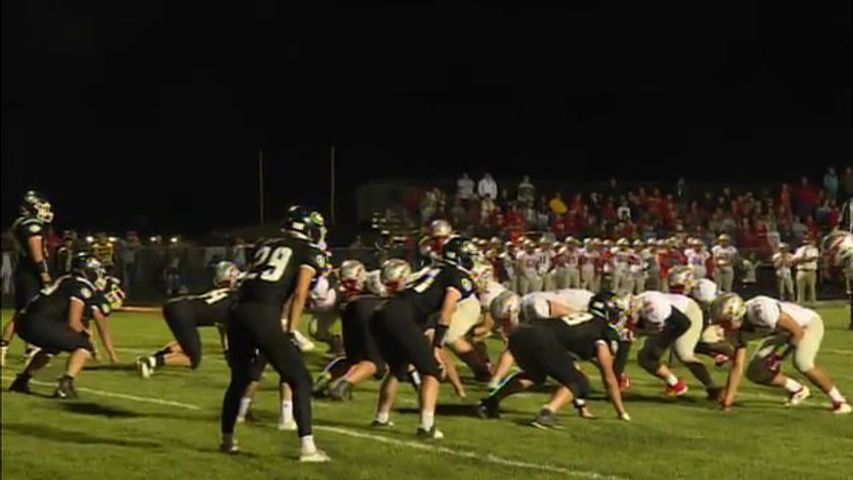 CENTRALIA - After the final whistle, a wave of Centralia students who recognized the weight of this game, against this opponent, rushed the field, waiting for head coach Jim Newsted to finish addressing his team after a big win on Homecoming.

As Newsted broke the massive huddle, players ran over to their classmates and were met with hugs and congratulations.

Winning on Homecoming is a special experience for players and fans, but this one was different for Centralia. Not only were the Panthers able to secure their first 6-0 start since 2012, but the team defeated its biggest rival, the Mexico Bulldogs, 13-10.

The Panthers had not beaten the Bulldogs since 2011. Every coach, athlete, and fan in attendance knew it, meaning taking a knee to end the game was even sweeter for Centralia.

Panthers players said before the game that a matchup with Mexico always feels different to them — not just on the field during the game, but in the week leading up to it as well. One of the main differences between this annual rivalry game and others for both sides is how physical the game gets. This year was no different, as almost every play was a ground-and-pound, win-in-the-trenches type. Games with that sort of identity come down to which team wins more individual matchups and who can outlast the other at the end.

Mexico didn't hurt itself  with unnecessary turnovers or penalties, so the Panthers earned the win down the stretch. The first half came and went in a blur, with the clock running almost the entire time because of the lack of passing plays. Down 7-0 at the half after a couple of missed opportunities in the red zone, Newsted and his staff let their team know how close they were to breaking through: If they just finished up on some of their blocks offensively, then they would have success.

The Panthers must have listened to their coaches, capitalizing on their last possession. Down 10-7 with just over five minutes left, Centralia got the ball back with every intention of going for the win rather than playing it safe with a tie. While Newsted and the Panthers have put up heftier scoring numbers the last couple of weeks due in part to an increased emphasis on throwing the ball, they opted to keep it on the ground for the entire drive.

There wasn't a run that broke free and only a few even got to the second level of the defense, but with each push the Panthers inched closer and closer to the goal line, picking up first downs when they had to. On a couple of the runs, tailback Jake Freidel was met with converging defenders almost immediately in the backfield but powered his way for positive yardage. The home fans roared for any run that saw a sliver of open field.

When Freidel found  his way into the end zone, years worth of frustration at the hands of Mexico was soon to be left in the past ... if the home team could make one more stop on defense.

In need of a touchdown to win, the Bulldogs had to throw the ball as time was running out. After focusing completely on the run to that point in the game, the Panthers dropped back into coverage and sent their pass rush at the quarterback. The fans got especially loud for fourth down, and the Bulldogs were unable to complete a pass to get the first.

Panthers players were filled with pure joy after the final kneel-down. They'd done something that classes before them were unable to accomplish in the last seven years, and now they head into Week 7 a battle-tested, undefeated football team.

Centralia's next game is at 7 p.m. Friday at South Shelby.