Laverne Cox takes the stage at the Missouri Theatre 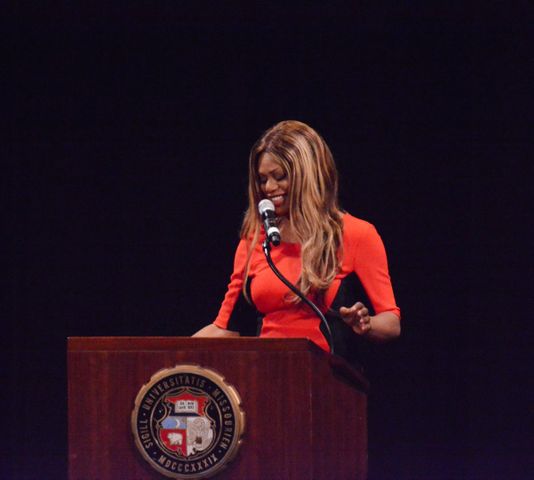 COLUMBIA - Activist, Netflix original series star, and Emmy-nominated actress Laverne Cox shared an evening with supporters and fans at the Missouri Theatre Monday.The Alabama native is more than just an actress, she is a graduate of Manhattan and Marimont college, and a recipient of several accolades for her various acting roles.

Cox  began her speaking tour in early October. The campus iniative OneMizzou, which advocates unity and creating a more inclusive campus environment, sponsored the event at the Missouri Theatre.The major theme in Cox's events was to encourage people to move beyond gender expectations and to live more authentically. She began the event with the M-I-Z chant and thank you's to all of her fans.

"I stand before you this evening a proud African American transgender woman," said Cox as she began her speech. She titled her speech "Ain't I A woman" after Sojourner Truths speech at the National Women's conference in 1851.

The Missouri Theater said tickets to the event had been sold out for two weeks. Fans showed up and filled the house in support of the star up to an hour and a half before the show.

"She is really a pioneer for the transgender movement for people of color, especially the people who get left in the background for the LGBTQ movement. I wouldn't have missed this event for the world. That is why I am here tonight," said MU student Payton Head. "It's nice to hear and watch someone who has gone through struggles you can identify with."

Time magazine named her the 4th most influential fictional character of 2013.

There are several more stops for Cox. Her next event is in New York where she will interview someone she says has truly inspired her, Bell Hooks. Her national tour lasts until the spring of 2015. Up next for Cox is working on a new project called Free CECE which explores the culture of violence experienced by transgender women.