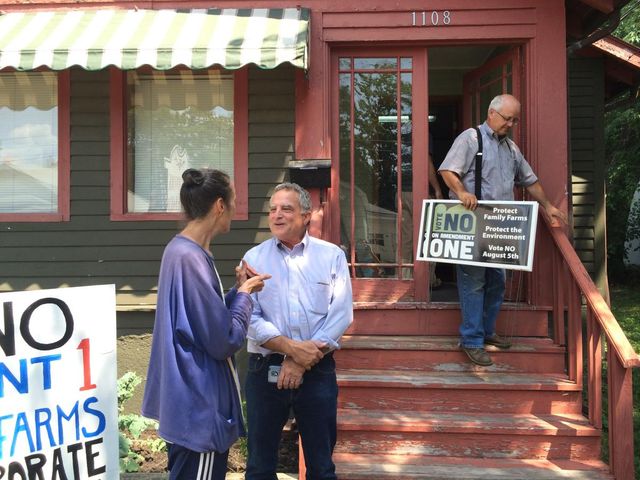 JEFFERSON CITY - Supports and opponents of the "Right to Farm," Amendment One on Tuesday's ballot, are making strong cases for both outcomes.

The bill reads, "Shall the Missouri Constitution be amended to ensure that the right of Missouri citizens to engage in agricultural production and ranching practices shall not be infringed?"

David Bandre, a civil litigation attorney who remains neutral on the issue, boiled down the amendment as simply as he said he could.

"If a farm has been in a location for a year and has not changed what it does, adjoining landowners will not be able to sue that farm for creating a nuisance."

He cited noise, smell and hours of operations as examples of possible nuisances. When KOMU 8 News asked how a voter could know that from simply reading the bill on the ballot, he said the amendment's general wording leaves lots of room for interpretation.

The confusion and the apparent mixed messages boil down to unspecific language. He said the intent of the amendment is to limit litigation from adjoining landowners, and to let farmers operate without fear of lawsuits. Since the measure is written vaguely, it does not differentiate between a family-owned small farm and large corporations. He used an example of a residential development being built next a farm that's been in a family for generations. Those residents would not be able to sue the farm. They also would not be able to sue a large, brand-new corporate farm under the phrasing of the amendment.

"It's problematic," he said. "Especially when you look at the polls right now."

A legislator proposes a bill with specific language, and while it's changed throughout the House and Senate approval process before it hits the ballot.

"What strikes me is what I think strikes most people that are who are against it that it uniformly applies to all farms," Bandre said. "Whether that's a small, family-owned farm who's been in business for generations or a large corporate organization."

Bandre said while it is common for ballot measures to be vague in nature, this one is particularly general. There are several reasons for its vague wording. First, the ballot measure itself must be cut down to a limited amount of characters to put on the ballot.

He said the same process applies to the ballot measures. Bills often fill dozens of pages in their entirely, but have to be condensed down in the ballot summary.

"The ballot language is vague, but it always is," he said. "In my mind, this bill itself is somewhat more vague than most."

He described ballot measure writing as an art. He said he believes it was intentionally written that way. He said a bill is written in a way that would most likely allow it to pass. For questions on why the vagueness of this particular amendment, voters must look to the backers and supporters.

Bandre said he knows of half a dozen other states with "Right to Farm" bills. However, those bills largely apply only to family farms. He said the language in those bills is specific enough to rule out applying it to larger corporations.

Whether the amendment will pass or not is up to the voters.

"I think it comes down to whether the proponents and opponents of the bill, how their message gets out there," Bandre said.

"I know the opponents of the bill are trying hard to make it known that this vagueness, in their mind, helps the corporate farm," he said. "It's just a matter of who they can reach with their limited time and limited budget."

Bandre said the average voter often goes into an election with a firm grasp of one or two of the issues on a ballot, and decides pencil-in-hand for the others.

"This could turn out to be a good thing," he said. "Only time will tell."

The primary election is Tuesday, August 5.

Smart Decision 2014: Analyzing Amendment One - The Right to Farm