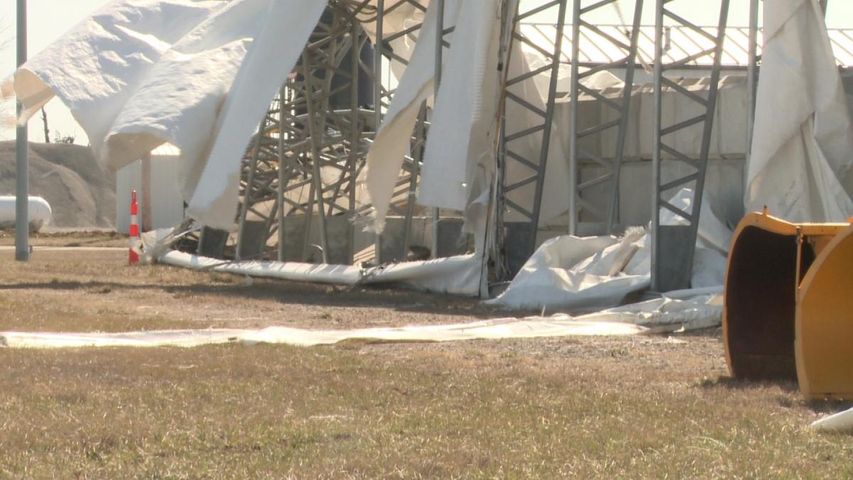 LEBANON - By 4 p.m. Wednesday, all residents in Lebanon had been accounted for, and emergency management reported only five minor injuries sustained in the tornado that ripped through the town just after midnight.

According to Laclede County Emergency Management Director Jonathan Ayres, the town was "lucky," especially in wake of reported fatalities in nearby Buffalo and Cassville Counties.  "The reaction here in the community is that we've dodged a bullet. If this would have happened 24 hours later, we would have been right in the middle of opening day for Bennett Springs State Park for trout fishing season," he said.

But, according to Ayres, several town businesses were not so lucky--major structural damage occurred throughout the town, especially at Tracker Marine Boat Shop.  A worker estimated the number of boats damaged will cost the company about a million dollars.

On Ivey Road, the storm ripped off the roof of the MoDot salt tent and blew through a trailer park, demolishing some trailers beyond repair.  The roof and insulation of James Miller's trailer lay stuck in his backyard trees, and the mobile home had been shifted five feet.  Miller said he, his wife and two children were inside watching a loud, surround-sound movie when the tornado hit, and thus did not hear the sirens. When he grabbed his wife and kids and jumped into the bathtub, they heard a sound characteristic of a freight train.  Within minutes, it was over--the mobile home was badly battered, but the family was unharmed. The Millers credit their lives to their outdoor air conditioning unit, which prevented the trailer from toppling over.

Both James Miller and his wife Cynthia are unemployed, and the family has no immediate plan for when they must leave their temporary residence at a hotel--paid for by the Red Cross--in three days. But, they remain positive and say the experience has rendered for them a new sense of humility.

"We'll embrace it. We'll learn from it. We'll move on," said James Miller. "Next time, we won't just play the guessing game.  Cynthia Miller suppressed tears as she said, "Two total strangers came up here and gave us $20. And I'd like to thank them for that."

Though Governor Jay Nixon issued a state of emergency for Missouri Wednesday afternoon, Ayres said Lebanon is not asking for state assistance.  Power has been restored to most residents, and the Red Cross has closed its shelter due to lack of demand.  But, county officials are urging local residents to check with their insurance companies before removing any debris from their property.