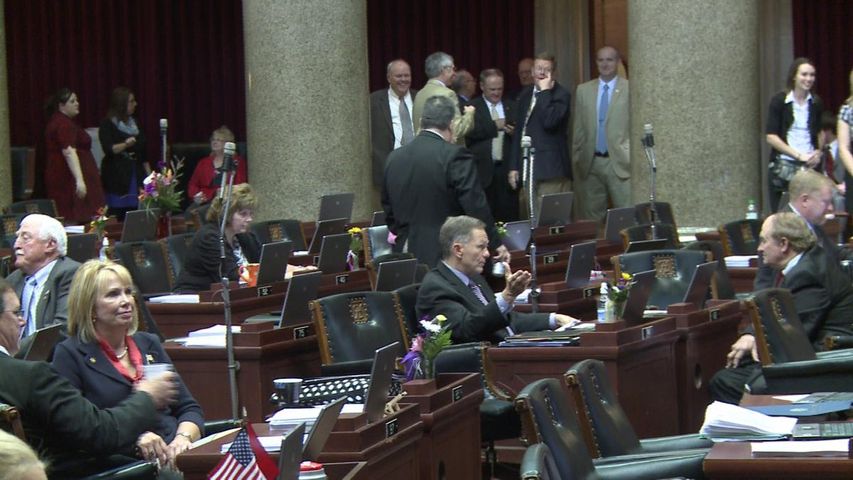 JEFFERSON CITY - After a process that included a week of contentious cross-chamber negotiations, both houses of the Missouri General Assembly sent the state's 2013 budget to Gov. Nixon's desk Thursday.

The House had little debate except for the bill appropriating money for the Department of Social Services. This bill was the largest of the 14 bills containing next year's budget, accounting for more than $8 billion of the $24 billion budget. More than one member of the house said the bill did not do enough to address shortcomings in the state's social services.

The budget's provisions include:

Speaking at the start of the budget debate, house budget committee chair Rep. Ryan Silvey, R-Kansas City, said he believed the 2013 budget was "the most transparent in decades." Rep. Sara Lampe, D-Springfield, said while the budget proposal was good, there was work she felt still needed to be done. For example, Lampe said she was glad to see state workers get a pay raise, but cautioned that reductions in the state workforce were forcing fewer workers to do more.

Representatives from both parties said they were proud of the work house Silvey had done. Lampe said she thought Silvey did an excellent job of getting input from both parties during the conference committee process. Rep. Timothy Jones, R-Eureka, said he would miss Silvey's leadership on the committee. Silvey is running for the Missouri Senate in 2012.

Silvey and Rep. Chris Kelly, D-Columbia, said they were proud of the work their fellow committee members and staffers had done. Kelly said he believed this was the hardest budgeting process he'd ever seen.

Other members of the house disagreed. Rep. Mary Still, D-Columbia, said in a statement the budget was a "recipe for mediocrity," citing a $429 million shortfall in K-12 funding and a $9 million reduction in early childhood education grants.

The 12 budget bills passed Thursday join two others which did not go through the conference committee on Gov. Nixon's desk. Gov. Nixon signed one of those bills, which deals with supplemental expenses, on April 30.