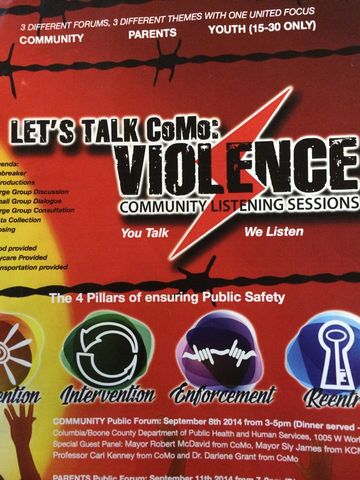 COLUMBIA - The  Mayor's Task Force on Community Violence will hold a meeting Monday afternoon to spark a conversation on gun violence prevention in the community.

This will be the first of three meetings this week that target different age groups. The one Monday will be for the general members of the community. There will be one on Thursday for parents and then only younger people ages 15-30 will be invited on Friday.

Pamela Hardin is a member of the task force. She is also one of three members who planned each forum. She said that having different age groups present will help get different information and ideas to help with violence prevention.

There will be three to four panelists each day who will get about two minutes to discuss the gun violence and give their expertise on possible solutions to work toward in the community.

The meetings have panelist that are age specific, but they aren't your traditional presentations. They're more of a public forum, where community members are invited to participate in small groups so everyone can get their opinions heard and ideas brainstormed.

The idea behind the small groups is to get feedback and data that the task force can transform into something substantial pertaining to the community.

"We don't want the forums to be where we're sitting and we're talking, that's why we called it Let's Talk Como," she explained. "We want to make sure that Columbia talks to us and tells us what they want to see happen."

The task force will also focus on four pillars as well: Prevention, Intervention, Enforcement, and Reentry. Hardin says focusing on these pillars is key to working towards ending gun violence in the community.

"We have those four pillars, and we're wanting the groups to deal with those pillars and be able to come out so we can come together as a community and get a solution," she said.

Eventually, the task force hopes to set a standard of safety not only in the Columbia area, but around mid-Missouri as well.

The meeting will be from 3-5 p.m. later today at the Columbia and Boone County Public Health and Human Services building. The Thursday event will be from 7-9 p.m. at Progressive Missionary Baptist Church and the Friday meeting will be at the Armory Sports Center from 6-8 p.m.