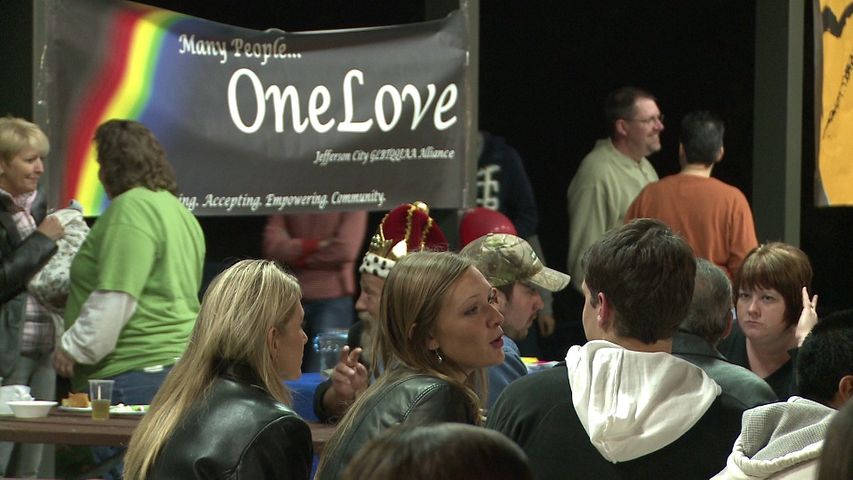 JEFFERSON CITY - Thursday was a big day for LGBTQ community members. About 80 people in Jefferson City gathered to celebrate diversity and raise awareness for the 2nd Annual National Coming Out Day Rally.

Stephanie Scott-Huffman, the director of OneLove, said the purpose of this event is to deliver hope to people in the community who is still alone.

"Without a community, many people are isolated and struggling by themselves," Scott-Huffman said.

Michelle Scott-Huffman, Stephanie's wife, said she believes that everyone is beautifully and wonderfully made by god, and her community called their specialty "the gift of otherness."

"Unless we come out and show these gifts, show our true colors, then we are not able to be the wonderfully diverse world that we are made to be," Michelle Scott-Huffman said.

"Missouri is viewed as fairly conservative state, and Jefferson City has been viewed as a very conservative town. Therefore, it is very important to hold the counter-narratives and lift the positives."

Sharon Morgan, President of Unitarian Universalist Fellowship of Jefferson City, said she and her community welcome everyone to join their congregation. Although Morgan is not a member of the LGBTQ community, she has two daughters and one grandson who are in the community. She joined this event to support people like them.

Thursday night's rally is the third event Jefferson City's LGBTQ held for the week. They also had their first Bridging the Gap-Solidarity Walk over the Missouri River on Wednesday for gay rights and to raise awareness.