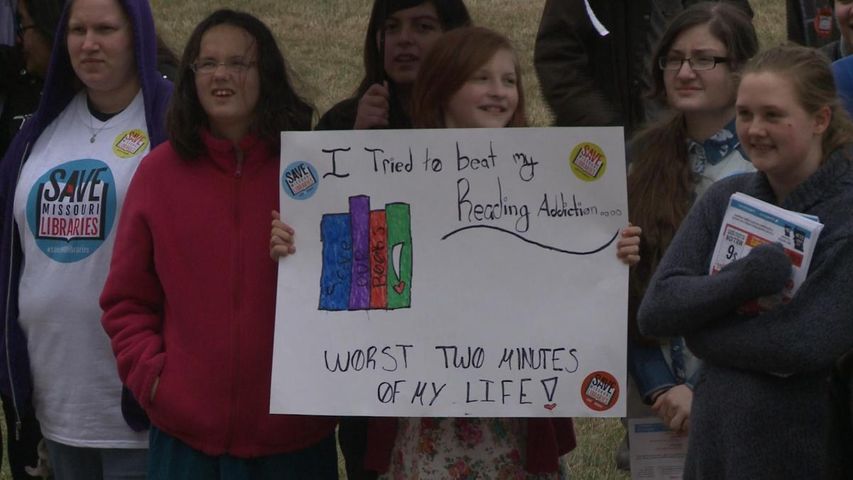 JEFFERSON CITY - Supporters of the "Save Missouri Libraries" campaign held a rally at the State Capitol Wednesday, accusing Gov. Nixon of trying to defund Missouri libraries by $6 million per year.

The organization claims summer reading programs, internet access and federal funds and grants could be at risk. It also claims library locations may have to restrict hours or close entirely without state funding.

Most of the rally's attendees were students. Some came from districts in the Kansas City area.

"The government is keeping money that the library owes," Shea Martinez, a high school student from Independence, said. "I got my first job because of the library."

Martinez said if it weren't for libraries, she'd be "back on the streets."

"I have an outlet," Martinez said. "I was able to meet good people there that helped me out and helped me raise my grades."

Alysha Reital, a student from Kansas City, said libraries mean a lot to her as well.

"It's a place they can express themselves, they can get lost, they can ignore bad situations," Whorton said. "It's a world full of imagination."

Scott Holste, spokesperson for Gov. Nixon, said in a statement to KOMU 8 News:

"The Governor has the ultimate responsibility of ensuring that Missouri's budget is balanced and that the state lives within its means. Because the budget passed by the General Assembly for the current fiscal year was several hundred million dollars out of balance, it was necessary for Gov. Nixon to veto some spending items and restrict spending in other areas. Balancing budgets often requires making difficult - but financially necessary - decisions, because the state cannot spend money it doesn't have."