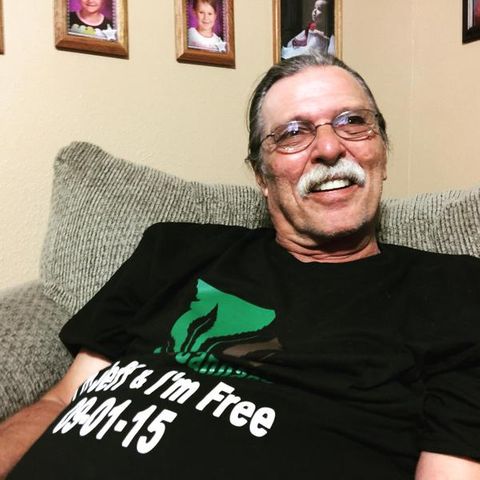 SEDALIA - Jeff Mizanskey says spending time with family has been the best part of being out of prison.

"That's better than any other thing there is," he said.

Mizanskey had an emotional reunion with his family Tuesday when he was released after serving 21 years of a life sentence on marijuana charges.

When he walked into open arms in the lobby of the Jefferson City Correctional Center, the first thing he noticed was people recording.

"I walked around the corner. I see nothing but cameras and people holding - I thought it was cameras at first. I guess it was kind of cameras - telephones with cameras in them. And I'm looking around and I'm like, 'Oh my God.' I almost turned around and went back in. But then I thought, 'Aw, if I do that, they're not going to let me leave so..."

Just a month earlier, while waiting to hear whether he would be paroled, Mizanskey said he was really looking forward to eating "real meat." His first meal with family Tuesday was a large steak.

"Ecstatic, I was so emotional," Michael Mizanskey said. "I didn't go to bed until three o'clock in the morning."

Jeff Mizanskey has spent time since reflecting on the extensive efforts to secure his freedom."

Hundreds of thousands of people supported an online petition, and Show-Me Cannabis placed billboards on highways throughout Missouri to draw attention to his cause. Nearly 10,000 people have followed developments on the Facebook page FreeJeffMizanskey.

"To know that people care, it kind of reignites your faith in humanity," Mizanskey said. "Because, after sitting in there for so long, watching people going out for molesting kids and things like that and knowing I'm stuck in here forever."

When his brother, Michael Mizanskey, found out Jeff Mizanskey got life in prison for three marijuana offenses, he was shocked.

"Wow, I couldn't believe it," Michael Mizanskey said. "I couldn't fathom that somebody in the United States of America could get life in prison for marijuana."

After years of calls for Jeff Mizanskey's release, Gov. Jay Nixon commuted his sentence. On Aug. 20, a parole board granted his release.

"A lot of hard work by a lot of people," he said. "I thank you from the bottom of heart for giving my brother back to his family.

Michael Mizanskey said he promised his mother on her death bed, "that I would do everything possible to get my brother out of jail and it finally, finally happened." Jeff Mizanskey said he also made a promise to his mother that he'd never commit another crime, which includes smoking marijuana, which is still a federal offense.

The picture below shows Jeff Mizanskey meeting his grandson for the first time since his release.