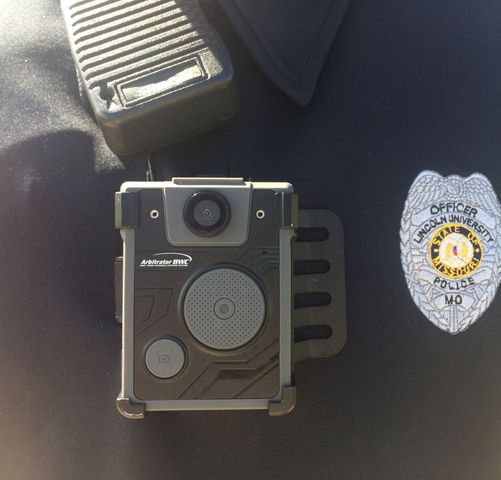 While on duty, Lincoln University campus police officers are expected to wear body cameras, according to a recent press release. The cameras are to be on the entire time an officer is patrolling the campus.

There are always three officers on duty at a time and each officer is equipped with a device.

The Lincoln University campus police received training for the devices over the summer and began wearing the body cameras in August, the press release said.

Director of University Relations Misty Young said "We use the cameras in student conduct cases so if we need to have evidence against students for specific cases, then we use them for that."

The cameras are also used if students have problems.

"If by chance there should ever be a complaint against an officer, we have the cameras as well," Young said.

The camera clips to the middle of the officer's chest. Each camera individually cost $881 and it a total of $7,410 was spent on four cameras plus accessories.

If an officer needs to record a specific event, it is their responsibility to hit the record button, the university said. The cameras record constantly, but the recording is only saved once the officer hits a button. Then the camera documents the 30 seconds prior until the button is hit again.

Some Lincoln University students said they think having body cameras on campus is beneficial.

"Body cameras are a helpful thing other than the cameras that are on their cars," LU student Rodneychia Taylor said. "It's a closer view than anything else."

Charles Dunn said, "You can get two or three different stories but a video will tell exactly what happened,"

One student said she doesn't think body cameras are necessary on the university's campus.

"I don't think campus police are the issue," Caprice Thomas said. "I've never heard of any instances here where we have a problem like a Trayvon Martin incident."