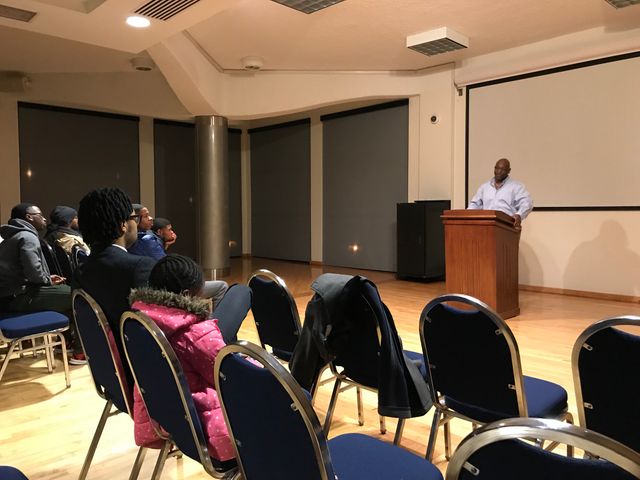 The event gave young men the chance to ask an older black man about his life experiences. It also gave them the chance to get advice on situations they’ve been in.

“This event to me it hits home cause everybody goes through their own situations and obstacles, but when do you really talk about it?” Robinson said.

Lincoln University student Dominic Moody said the event will help students who don’t have an older male to ask for advice.

“Most of them don’t have father figures in their life, so for another black male to come down here and actually teach them, or tell them their experience on life and how to be better, I think is great.” Moody said.

The speaker, Byran Murray, talked about his experiences in the workplace, reaching success, and loving being black in America.

“You have to learn to be comfortable in your own skin,” he said.

Murray said he wants to let young people know they can be whatever they aspire to be. He said young black men have to understand they don’t have to be a rapper or athlete in order to be successful.

Murray also said there should be more black educators in schools.

“I think it's crucial to see the perspective of a black man. For one, as we grew up as black people we don’t have black men as teachers in schools.” he said.

Murray said he didn't have a black male teacher until he got to college.

Murray will speak at "Ask A Black Man" event each Wednesday in February at Lincoln University's Scruggs Ballroom from 5:30 p.m. until 7:30 p.m.