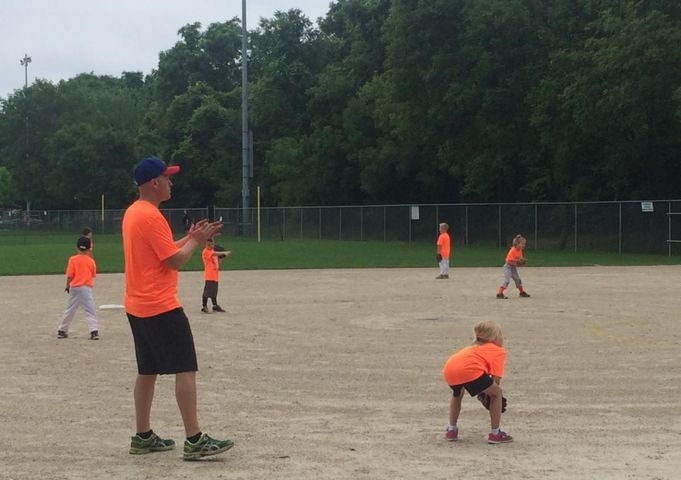 JEFFERSON CITY - A mid-Missouri father has taken on the role of head coach for his son's first grade coach-pitch baseball team.

Brian Bernskoetter is the Eagles' first grade head coach and said he always wanted to coach his son, Trent's, team.

"It's just something my dad always did and I've always wanted to do," Bernskoetter said. "I played t-ball with one of the guys that's also a coach on the team, so it's kind of nice to have our kids at the same age, and both on the same team. It's what I've always done and what I've always look forward to doing."

Bernskoetter said he gets into the games to pump up his team, and Trent follows in his footsteps.

"He's probably the loudest person that's under 5 feet tall," Bernskoetter said. "And he's excited and he wants to do exactly what I'm doing, which is a little bit difficult because I don't need another coach on the team, especially when it sitting on the bench and telling the kids what to do. But it's what he does and it's hard to stop him."

Bernskoetter said he enjoys coaching the Eagles and getting the opportunity to watch Trent play baseball from the field.

"It's one of the funnest things I do," Bernskoetter said. "I look forward to it every year. I don't want to ever miss an opportunity to do it because it's one of the things that you don't get too many chances to get."

But the one thing people in the stands might not know about Coach Bernskoetter is how he feels when his son steps up to the plate.

"Whenever he's up to bat, I'm almost always throw it at him or throw it too far away from him," he said. "I don't know, he gets in my head."

Trent said he likes having his dad as a coach on the team and learns a lot from him.

Bernskoetter said coaching the Eagles gives him the opportunity to bond with his son and build a sense of community.

"A lot of these kids are going to grew up with him for the rest of grade school and high school career," Bernskoetter said. "And so for me it's an opportunity to actually, not just coach him, but get to know kids that are going to be in his peer group for the rest of his life."

Bernskoetter said coaching has caused his relationship with Trent to grow.

"It's one thing to watch the game and ask what happened, but it's another thing entirely to be in the game and explain to him what's going on at the time and get to follow up at home with practice and lessons," Bernskoetter said.