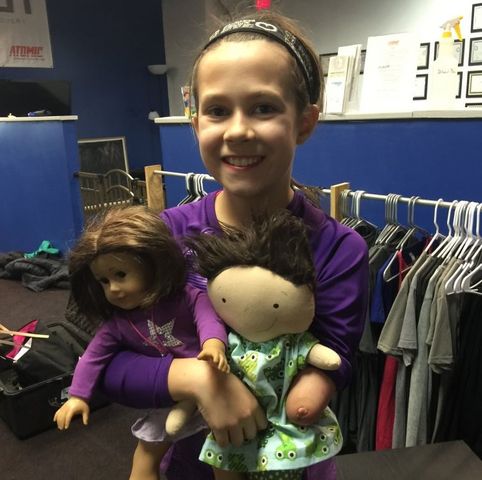 COLUMBIA – Jordan Reeves was born with one hand, although that hasn’t stopped her from being a typical 10 year-old. But there is one thing Jordan said she still wants: an American Girl doll that looks like her.

Jordan’s mother, Jen Reeves, said she remembers buying Jordan’s first Bitty Baby doll from the Chicago American Girl store. But while the doll had similar hair and a matching outfit, Reeves said Jordan still asked why the doll didn’t look just like her.

When Jordan and her mother heard about American Girl recently releasing a diabetes kit for its dolls, they decided to petition American Girl and ask for the creation of custom limb-different dolls.

“My American Girl doesn’t look me because it has all of its limbs, and I’m missing one. And it kind of makes me feel a little different from all the other people,” Jordan said.

Jordan does have one doll that looks like her. A Doll Like Me made her a doll with one hand.

“She makes dolls that actually look like you, and it’s really cool,” Jordan said.

But with more than 14,000 people supporting her petition as of Thursday, Jordan said she’s hoping American Girl will make a doll that looks like her too.

American Girl released a statement in response to Jordan’s request. It said in part, “We are unable to accept product ideas or guarantee when, or if, a particular product will be developed. That said, our design teams are constantly exploring new ways to enhance our doll lines with items that resonate with girls on a variety of levels.”

Jordan has been getting national attention and interviewed by national media for her petition; for KOMU-8, this story is even more local, as her dad works in the newsroom.

Beating pandemic fatigue during the last couple months of 2020