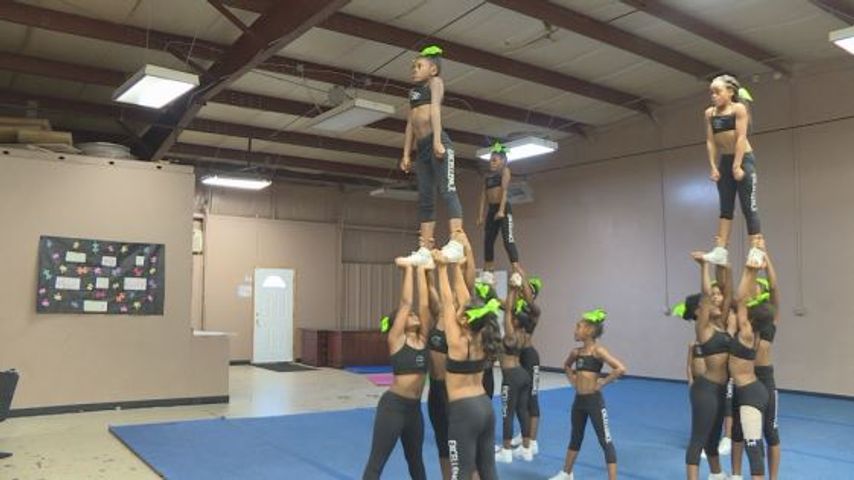 COLUMBIA - What looks like a makeshift gym in the back of Urban Empowerment Ministries is home to a team of young, talented girls.

Their faces glisten as they do flips across the gym and their arms don't budge as they hold fast in a human pyramid.

Before every practice they join in prayer and ask for safety and a "good practice."

Spirit of Excellence is a Christian-based, All-Star cheer team with girls ranging from the age of 7 to 13 this season.

A study shows that less than 7 percent of minorities participate in All-Star cheerleading or dance industries, which coach Whitley Jones said makes Spirit of Excellence's work so vital.

"It is our job to open this door to expose them to this realm and this world, that they would have otherwise probably never tapped into at this level," Jones said.

Jones said the team is built on holistic development, which sets it apart from other groups.

"We really take time to develop the whole child," Jones said. "We look at not only the physical strength or talent of the child and teaching them and building them up in an athletic component, but we also look at their spiritual, mental, emotional, overall well-being."

She said the years are the "building blocks" of their lives.

"If you build them to be strong children now, I believe that we have less work as people to do later to rebuild them when they become adults," Jones said.

All-Star teams are competition focused and are choreographed to music that include stunts, jumps, tumbling and dance.

Jones sets the standards high when it comes to the girls on the team.

"The girls are so gifted. I want to take it up a notch because the girls have so much natural talent," Jones said.

The idea to form a cheer team came to Jones in 2011 when her pastor's daughter Kiyah Woods asked her to start one. Jones founded Spirit of Excellence in 2012, a year after her college graduation from the University of Missouri.

"I was not planning on doing this program at all," Jones said. "I began to pray and God just began to reveal to me the vision for the program in terms of actually making this happen for the girls."

Jones said it went from a grassroots ministry to what it is today.

"It started as a creative ministry activity that they could participate in because a lot of the girls liked to cheer and dance and just needed someone to invest in them professionally."

Spirit of Excellence is now a non-profit team registered with the United States All-Star Federation.

"God has just built it into this amazing organization that has touched the lives of so many girls," Jones said.

They constantly push the girls to be better leaders.

During breaks at practice, the team comes together to see if its three values are being met: teamwork, focus and leadership. The girls make sure they are putting on the best performance each and every time and also make sure the team is acting maturely to accomplish the goal of the day.

Washington hopes to make an impact on the girls.

This season, the team has a theme of "Created for This."

"We are a Christian-based program and so, although we don't force belief in Jesus on the girls, it is a part of who we are," Jones said.

Jones said she has learned a lot from the team.

"The girls have taught me that in order to lead people, especially to pour into this next generation, you have to be able to be vulnerable and give up yourself," she said.

Spirit of Excellence has won more than 40 awards and achievements since its first season.

Jones wants the girls to take away one key lesson this season.

"Never give up, and it's OK to work hard to become the best you that God intended you to be."

Spirit of Excellence plans to perform in 12 competitions before the season is over.