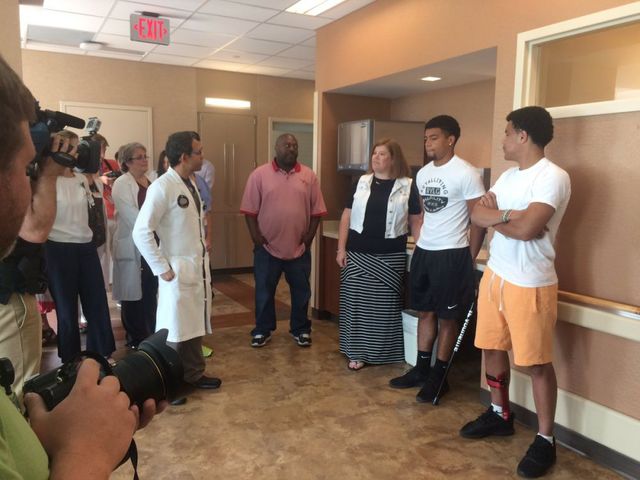 COLUMBIA - A local athlete had a chance to reunite with team that saved his life after he nearly died from a brain aneurysm.

Drew Tyler was a basketball player at Battle High School, and during his junior year got a severe headache. He was rushed to the Emergency Room at MU Women’s and Children’s Hospital, where doctors found the life-threatening ruptured aneurysm.

Now, Tyler is almost at full recovery. He can walk and speak after near paralysis.

Sara Tyler, Drew’s mother, said they wanted to come back and show the people who saved her son’s life who their son really was.

She said they felt a connection with Drew’s caregivers.

“The people here I mean you’re just living here and not really knowing what’s going on with your child and these people really became your life line," Sara said. "And the relationships that you develop with these people, they become your family and they were your… they we just connected with so many of them.”

One of the nurses who helped Drew get back on his feet said this was a very emotional case.

“First off, we were dealing with I guess a minor,” Hector Alonso said. “He received some pretty life changing illness in a short period of time.”

Drew doesn’t remember any of what happened, which Alonso said is a good thing.

“It was a very, very difficult and stressful time," Alonso said. "The type of injury that he suffered — the brain still hadn’t had an opportunity to recover. It was still swelling. I mean he, it’s a good thing he doesn’t remember what happened here. It’s a very traumatic and painful experience so we’re kind of happy that he doesn’t remember it.”

Drew's twin brother Drey will start his senior year at Battle High School later in August. It’s not certain if Drew will be back at school in the fall, but his mom says they just finished neuropsych testing and will get those results next week. At that point, they’ll have a meeting with the school district.

According to University Hospital, approximately 30,000 people in the United States experience ruptured aneurysms each year.