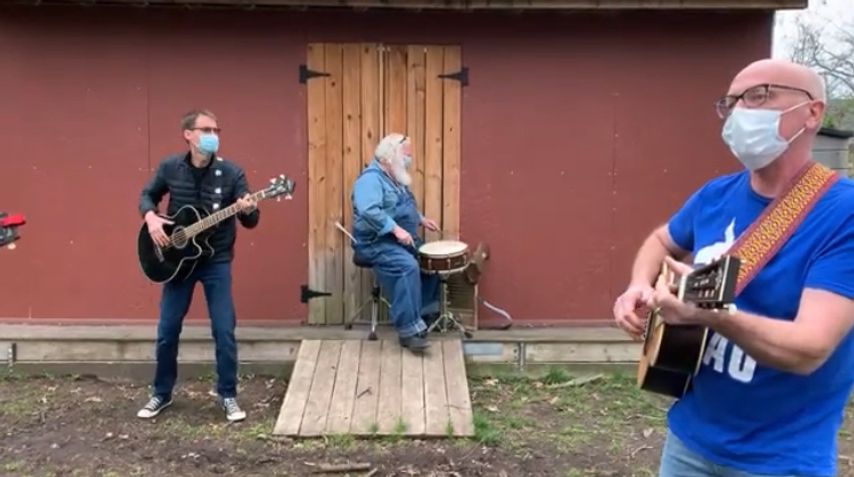 COLUMBIA - While many local bands have decided to cancel their performances and put a pause on practices due to quarantine, local band 2bit Steve has decided to continue their creativity.

To keep playing music while staying within social distancing guidelines, the band has given up on their studio and embraced nature.

"Steve thought his back yard would be centrally located," Joe Aguirre, the drum player in the band, said. "So we went there and set it up."

Aguirre said not only did the band move its venue, members are wearing masks and staying more than six feet away from one another.

"We had rubber gloves, too, but guys playing string instruments realized right away that the glove didn't help," Aguirre said.

The COVID-19 theme is not only being expressed in the way the band looks, but also is being embodied in many songs that they play.

"We did about four songs, we try first and make sure it all works, and record it," Aguirre said. "And they were all songs that Steve cleverly suggested that had something to do with COVID-19 and distancing."

Aguirre said if there was no pandemic, they would be having gigs and performances at Rose Music Hall, Rocheport General Store, and Cooper's Landing.

"There was a wedding that we were cancelled from," he said. "I hope they still got married."

Knowing that 2bit Steve band members will get together once in a while in the pandemic, the lead singer's mother made musical print masks for all members in the band.

"That was so nice for her to do," Aguirre said. "There’s four of us, five in the other band, so she made quite a few masks for all the band members."