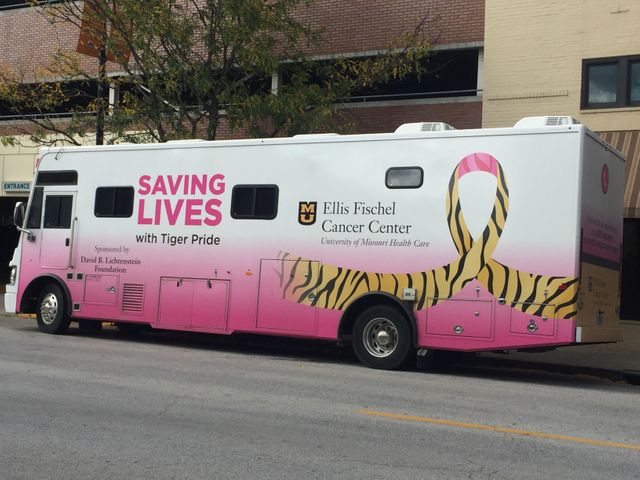 "I know year to date Pink Pursuit has raised enough money to provide 500 mammograms for the state of Missouri,” Founder and Director of Pink Pursuit Liz Schulte said.

Schulte said the Mammogram Van, or 'Mamm Van,' will park outside schools, businesses, or churches and provide mammograms all day. Insurance will cover the procedure, and if you don't have insurance Pink Pursuit will cover the costs.

"We have actually been touched by some individuals who received their first mammograms on the van that actually found breast cancer and were able to beat it at the early stages because of the early detection," Schulte said.

Schulte said the MamVan is fully equipped to look just like a doctors office. She said it offers traditional and 3D mammography.

Schulte said she has had multiple mammograms on the van.

"You feel very comfortable," she said. "The staff of the van are by far the best I've ever experienced, and especially in a position where you feel vulnerable. You're made to feel more comfortable than you probably would at a regular doctors office."

Shulte said she started Pink Pursuit after seeing an MU research project that said breast cancer is more prevalent in rural communities. She said she started raising money to make sure all women in Missouri can get breast exams.

"When people are three hours away from a mammogram they're not going to go," she said. "But if we can get the van about an hour or thirty minutes away, the chances of them going are a lot higher."

Breast cancer survivor Shannon Dye said she attended the event to support one of the things that helped her win her battle against cancer.

"To have someone like Liz that’s promoting not only breast cancer awareness but that's trying to raise funds so that every woman can get a mammogram and early detection," Dye said. "It means a lot to me because since I was able to have my breast cancer detected early, I'm going to survive”

She said the Mamm Van is a great way to encourage women to get a mammogram who might not otherwise have had one.