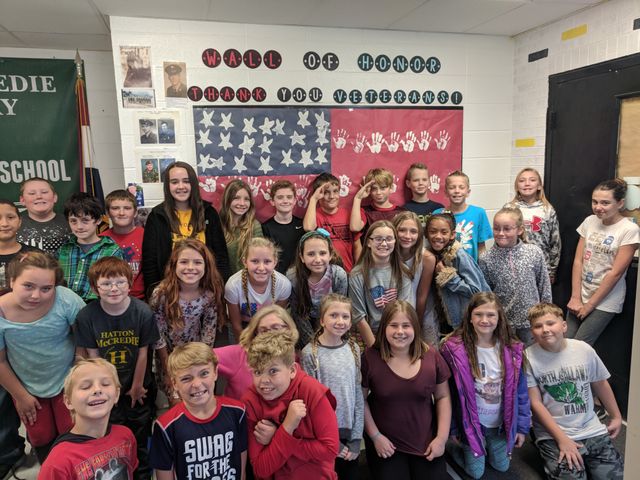 Sergeant Talon Leach died in July, when a military plane crashed in Mississippi. Leach was aboard a KC-130 refueling tanker flying from a Marine installation at Cherry Point, North Carolina to a naval air field in El Centro, California when it crashed into a farm field in Mississippi.

Leach was from the Fulton area, and he attended Hatton-McCredie from 2000 to 2004.

Joveta Deimeke was Leach’s 6th grade teacher when he attended the school. Deimeke’s 5th grade class this year is honoring Leach, and the other 5th grade class followed suit.

“He was a very spirited young man,” Leavene said. “He was full of life, a class leader, and full of energy. I remember that, always on the go.”

Principal Christy Biggers said the 5th grade class scattered 2-liter bottles throughout the school to raise the money. As the bottles were filled with change and singles, the class eventually got all the way to the $900 mark. Biggers said families made larger donations once it got closer to the day of the assembly.

Talon’s parents were at the ceremony. Leavene said the atmosphere was somber.

“Proud to be an American always gets to me,” Leavene said. “Seeing his dad and parents up there, I went to the visitation, and there was the same feeling of solemnness, quiet and reverence.”

Both Biggers and Leavene said they’re proud of how the kids organized the assembly, and honored somebody they never got to meet.

The school raised enough money for three veterans to partake in an Honor Flight. On the flights, veterans get the chance to visit memorials in Washington D.C.