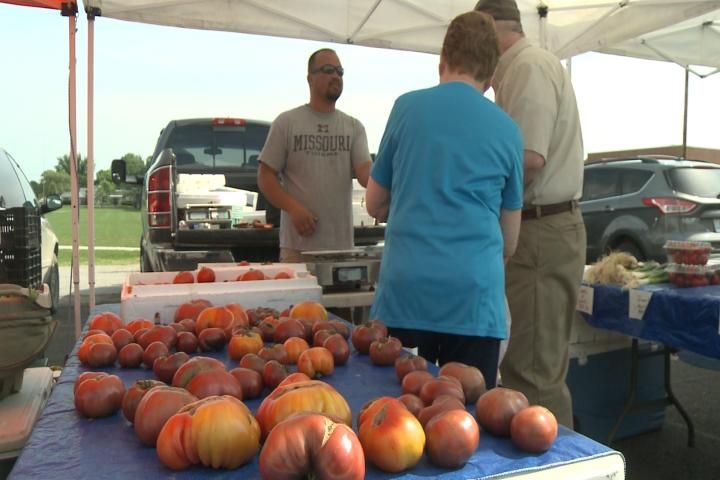 COLUMBIA - The sun was out Saturday, but it's been missing the past couple weeks. Farmers at the Columbia Farmers Market said the above average rainfall has affected their crops.

Pieter Los lives in Hermann, Missouri and runs WilFarm. He said he started coming to the Columbia Farmers Market in May.

Los said he hasn't been able to move his crops to the fields yet because of the rain.

"I have a high tunnel, which is about 3,000 square feet, which is covered in plastic, and it's where all my stuff is coming from right now," he said. "Then I have a little greenhouse that I start transplants, and that's full to the max because I can't take those plants out into the field."

The Associated Press said Missouri farmers averaged less than a day of fieldwork the last week in May because of the amount of rain.

The National Agricultural Statistics Service said corn planting is 87 percent complete, which is behind last year at this time when 99 percent of corn was planted. The five-year average for corn planting is 95 percent.

Los said normally he would have sweet corn to sell in about four weeks but because of the rain, he hasn't even been able to plant the corn yet.

NASS said only 23 percent of soy beans are planted, which is far behind the 74 percent planted at this time last year and the 57 percent five-year average.

Los said his lack of rain has affected more than just his crops.

"Financially it does affect me in the sense that I can't hire nobody right now because I don't have anything to sell," he said. "My farm increments have been reduced by at least half, so that's substantial."

However, Los said farming for him is just an "out-of-hand hobby," so he doesn't depend on it to make a living. He has a job at a hospital in Hermann.