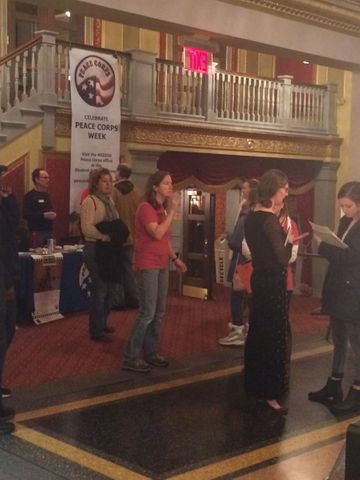 COLUMBIA - A recent New York Times poll shows that the majority of Americans support the government in its efforts to fight climate change.

Here in mid-Missouri, one local event is working to get people talking about hot-button issues, like global warming.

"That's the ultimate goal is just to spark conversations among people here, get them thinking about difficult issues, maybe getting them connected to parts of the world, just so we are more aware of our global neighbors," Third Goal Film Fest Coordinator Michael Burden said.

Organizers said the goal of the festival is to bring in global films that create local dialogue, a message that is similar to the third goal of the Peace Corps.

"That goal kind of plays off the third goal of Peace Corps which is all about bringing your Peace Corps service back to your community and to your home as a means of cross cultural understanding and exchange," Peace Corps Recruiter Lebo Moore said.

Each of the five films shown Saturday deal with global problems like gay rights, climate change and immigration and deportation issues.

Following the screening of the films, viewers were invited to stay for a discussion involving the film's directors, talk about these issues with peers and try a variety of international foods.

Organizers said these talks are important to help inform the community about areas where change is needed and help to make the push for this change.

"By knowing about it, thinking about it and then taking action, there is a lot of opportunity there," Burden said.

One of the films which specifically dealt with the issue of climate change and conservation, started a dialogue between viewers about the government's role in creating change.

"I think climate change is an issue that unfortunately has progressed so much that we can't stop it, but it is definitely something that we can curtail, and hopefully slow down the progress. I think the United States is such a big player in the global scene, and we should be doing more. I think it's things like citizen buy in, to help people recognize how connected we are to our natural surroundings, and if we don't pay more attention to them they are not going to be there forever," Moore said.

The New York Times poll also found that climate change could be an important issue heading into the 2016 presidential election.

The poll found that two-thirds of those who participated in the poll are more likely to vote for political candidates who campaign for fighting climate change.