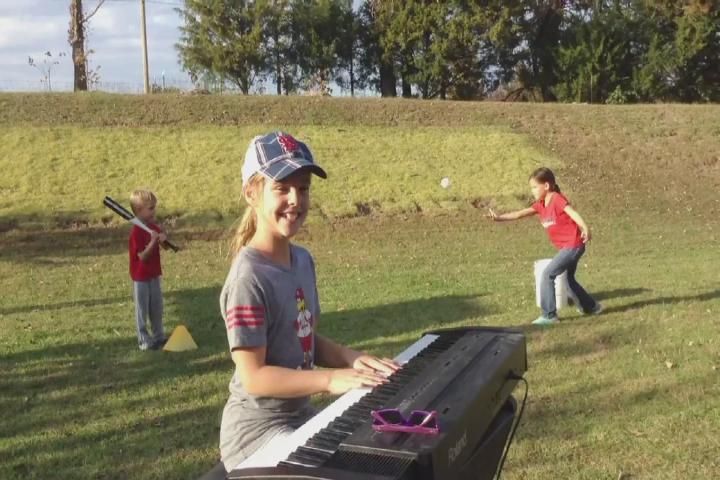 COLUMBIA - A local 10-year-old girl is in a contest that could get her music video played on the big screen at Busch Stadium.

Sunday Crane, who goes to Rock Bridge Elementary, said her mom found a contest on Facebook by the St. Louis Cardinals called the "Take Me Out to the Ballgame" Talent Contest.

Sunday said her dad made a music video of her playing the keyboard and singing "Take Me Out to the Ballgame" while her younger siblings are in the background playing baseball.

"My dad said we should go outside, and I have a keyboard at home, I really like to play the piano," she said. "So we went outside and Amelie and Liam, it was kind of accidental, but they got in the background and started playing baseball." (Read more.)

Sunday said she has been playing the piano since first grade.

"My grandpa plays piano, and I've always wanted to do that," she said. "It's more of a hobby. I intend to keep playing it for a long time."

People can vote once a day in the contest until July 3. The winner's music video will be played during the 7th inning stretch at the Cardinals' game July 29. The winner also gets 10 tickets to the game.

"We've always been big fans of the Cardinals, that's the baseball team that we root for," Sunday said. "My favorite player is Yadier Molina, so that's always exciting to go see him. It's really just fun being in St. Louis and seeing the Cardinals play."

"I'm in my school choir," she said. "My music teacher, Ms. Lenz, is really, really nice and she's kind of inspired why I like to sing."

Sunday's dad, Russ Crane, said this contest is a good opportunity for Sunday.

Sunday said she would be really excited if she won the contest and already has an idea of whom she would bring to the game.

"Well the whole family obviously," she said. "And my grandparents and maybe a friend."

People who want to vote for Sunday can go to the contest website and vote for the name "Heather Crane."