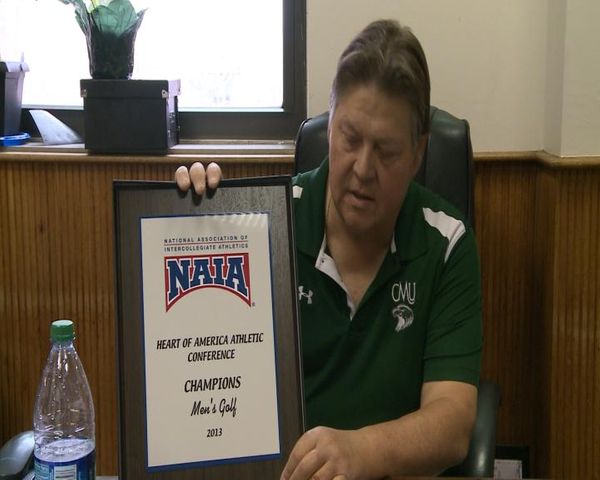 BOONVILLE - Jim Ray Kluck wears many hats at Central Methodist University in Fayette. He serves as an admissions counselor, and he is also the head coach for the men's and women's golf teams. He's a role model to his golfers for his perseverance, patience, and positivity.

Central Methodist has only had a golf program for six years. When the program was in its second year, the team finished second place in the Heart of the American Athletic Conference (HAAC).

Kluck has been coaching for many years. He was named Coach of the Year by the HAAC at the end of the 2013 season.

However, his coaching specialty wasn't always golf. In fact, he is unable to play the sport.

"I hire people to help me with golf," Kluck said. "I try to manage the six inches between their ears and keep everything organized like that."

Kluck did play golf. He began in his twenties, but after a diagnosis of cancer in his kidney in 2011, he has been unable to swing a club.

"It was an accident they found the spot," Kluck said. "I just thought I had pneumonia, but my lungs were cleared and they couldn't find out what the heck was going on."

Kluck suffered diabetes for many years, so doctors did an ultrasound of his kidneys after they ruled out pneumonia.

"That's when they found the cancer," said his wife, Richelle. "Fortunately, it was all self contained right there in the kidney, but having been a diabetic for so long, the other kidney was pretty well shot."

All of Kluck's ten children were extremely supportive. He said some of his children were even suggesting giving him a kidney, but Kluck said he didn't want to do that.

He also had his wife by his side. Kluck said she was extremely supportive through the entire battle and couldn't have gone through it without her.

"My wife was my rock," Kluck said. "We were given a few options, and the one we choose was dialysis at home. It took about 25 hours a week - 25 hours of her time."

Given the home dialysis option, Kluck was able to continue working.

"The first thing they asked me was if I wanted to go on disability," Kluck said. "I couldn't afford disability. I have three in college, so we have it make it work. It was frustrating at times, but I was one of the lucky ones that was able to keep my job."

On March 21, 2014, Kluck and his wife received word of a phone call that changed his life. One of Kluck's daughters, who attends Central Methodist, received the call from Barnes Hospital in St. Louis.

"She said, you got a call from Barnes," Kluck said. "I said I'm back up again, right? She said no, you're number one."

Kluck received his new kidney the same day of his mother's death 44 years ago. The kidney was a cadaver kidney.

"I would absolutely love to meet the donor's family, but they won't tell me who they are until they converse with those people," Kluck said.

His golfers said they look up to him as an inspiration both off and on the course.

"If he can overcome kidney cancer, we can get through a bad back nine," said sophomore golfer Trevor Cooley. "Thats the way we try to think of it."

Now, he is cancer free, and decided to step into a new role just before Fall 2014. He became the voice of the Boonville Pirates.

"He is known around here as a big time football guy, and when the position opened up this year he was really excited about it," Richelle said.

Kluck did realize he had big shoes to fill. Dane Gregg had been the voice of Boonville for many years. He passed away March 17, 2014 after a long fought battle with cancer.

Kluck said he did things different enough that he wasn't trying to copy Gregg's style. He just wanted to carry on the traditions of Boonville football.

"It's been a balancing act for Jim Ray," Richelle said. "He does what he has to do to get every place he needs to be and still be everything that everybody needs him to be, and that's a lot."

As if Kluck's commitment to the golf team and the admissions office at Central Methodist wasn't enough, he is finding new ways to keep busy while still maintaining a strong family dynamic between himself, his wife, and his children.

During these off months of the 2014-2015, Kluck is busy looking ahead as he recruits golfers for the next season. The Eagles do not have any remaining tournaments in 2014 but will resume play in early Spring 2015.