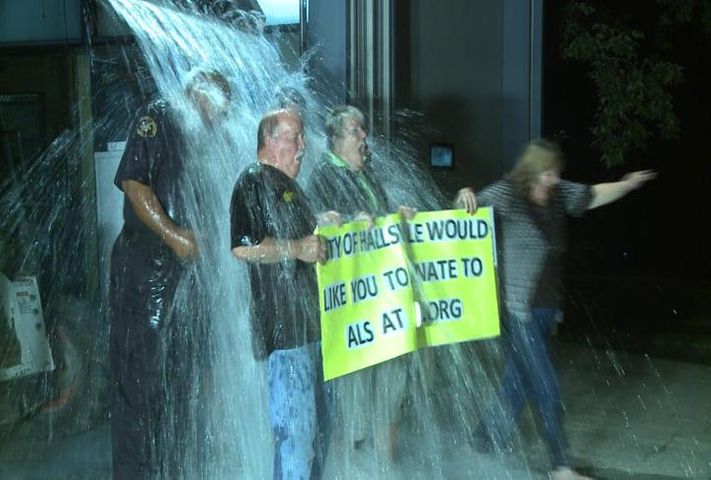 Ice cold water was dumped on Hallsvilles' Mayor, city clerk, cheif of police and Board of Alderman from a five-foot loader bucket.

Deputy Clerk, Kenyetta Ridgway, nominated them and said she thinks the challenge is a good idea.

"We just wanted to raise awareness in smaller towns, and they're going to nominate other cities so we thought we'd get the whole town involved," Ridgway said.

One alderman said he does not think that is necessary.

"We're just raising money for ALS research," Tom Pauley said. "I really don't think it's that big of a deal. It's just about public image, reaching out trying to help ALS."

"I think it's a good idea," Ridgway said. "It raises more awareness, so I'm not sure why they wouldn't allow it. But I think it puts it out there more just like celebrities and I think government would be a good idea."

Dr. Joan Coates has been involved in ALS research for the past fifteen years. She works specifically with dogs who have ALS and she said she supports spreading the word about ALS.

"I think it's up to the individual to make that decision, I did the Ice Bucket Challenge and for me it was a way to donate to ALS," Coates said.

Executive Director for Missouris' Ethic Commission, James Klahr, said there are no specific prohibitions in Missouris' laws that would ban government officials from participating.