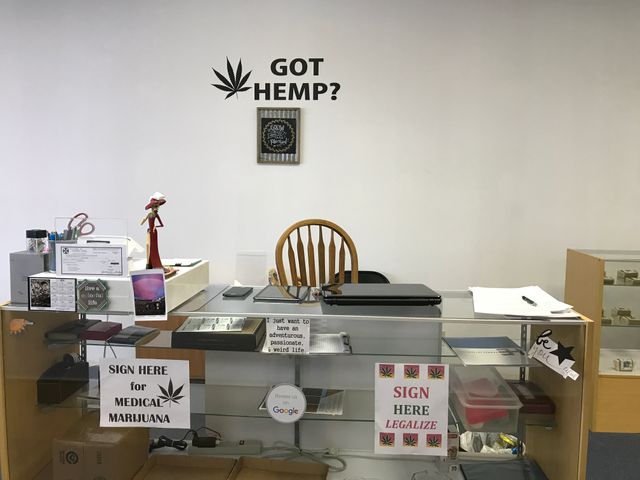 COLUMBIA - A petition seeking to legalize marijuana for medical use is about 50 signatures closer to getting on the November ballot after an event Sunday.

The May deadline is approaching for pro-marijuana groups to turn in signed petitions, and this local event gave mid-Missourians an opportunity to sign.

The mission was to gather support for a medical marijuana initiative backed by the organization New Approach Missouri.

Joy Wanner Sweeney is the executive director of the Council for Drug Free Youth, a Jefferson City based nonprofit advocating for abuse prevention policies and keeping youth drug-free.

Sweeney, who is against the marijuana initiative, said Missouri should take lessons from the current opioid crisis, because she believes there was not enough research done.

“Nobody fully researched the addictive level of opioids and what problems that could cause,” Sweeney said. “And that’s the thing—until you conduct sufficient research, you don’t see all the unintended consequences. And that’s what we are trying to prevent here.”

“People my age that are really the ones who are more accepting,” said Steven Faber, president of Mid-Missouri NORML.

“People with cancer... The medication isn’t helping with the pain, but smoking a little bit of marijuana does,” he said.

Jenkins said compared to alcohol, marijuana is not as dangerous as some people think.

Sweeney thinks the legalization of CBD products back in 2014 should already be enough.

“They already have legal CBD oil for children with epilepsy. So why do we need to do this anymore?” Sweeney said.

Faber said there are already plenty of resources and statistics available for people to look at online before making a decision to sign. He said signing a petition doesn’t necessarily mean showing support for marijuana.

“This is all about our rights as citizens. You can sign the petitions to put it on the ballot because you wanna vote against it. I mean, this is about our right to legislate or not,” Faber said. "This doesn’t mean you are in favor of marijuana necessarily. It just means you want the right to vote on it."

According to Faber, because this particular initiative is trying to place a constitutional amendment—rather than statutory changes—on the ballot, it would need to collect signatures equal to eight percent of votes from the last governor's election in six Missouri congressional districts.

In the Fourth Congressional District, he said about 28,000 signatures are needed.

Faber said Mid-Missouri NORML has collected close to 10,000 signatures in the Fourth District as of two to three weeks ago, and people can stop by Sacred Leaf during business hours any day before the May deadline to sign the petition.