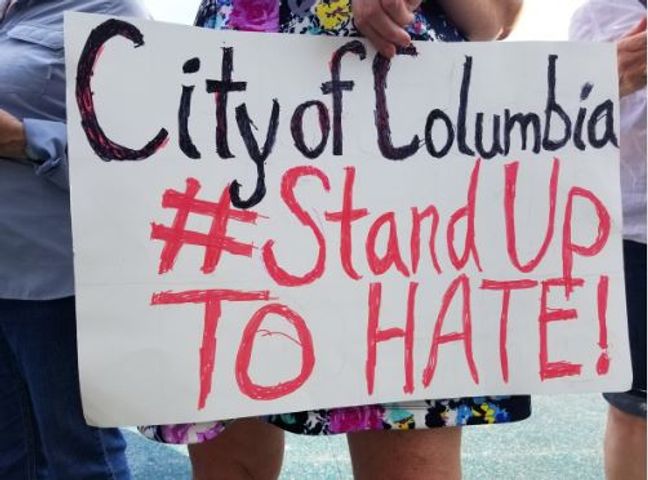 COLUMBIA - Two local groups gathered at City Hall Tuesday to stand in solidarity with the people of Charlottesville and to call on city leaders to respond to the events in Virginia.

The signs included phrases such as, "your silence is deafening," "stand up to hate," and "if standing up against white supremacy is too hard for you, resign from office."

Event attendees also took a selfie in front of the City Hall keyhole in response to a Twitter event already planned for city employees.

Rachel Taylor, a member of Race Matters, Friends, said the group decided to "hijack" the #CityHallSelfie hashtag and use it to call on elected officials for a response.

"I would like them to express solidarity with the people of Charlottesville, and to explicitly denounce white supremacy, white nationalist violence, nazism, especially in Missouri," Taylor said. "Words matter, our own president cannot bring himself to say the words he needs to say, that is a low bar, the mayor needs to exceed it."

KOMU 8 News reached out to Steven Sapp, the City of Columbia's community relations director, and he pointed to a statement released by Columbia Mayor Brian Treece Monday.

The statement reads, in part, "I strongly condemn the white supremacist racism and violence in Charlottesville this weekend. The vigil I attended in Peace Park on Sunday sent a clear message, in no uncertain terms, that this type of hate has no home in Columbia, Missouri."

The full statement is available on the city's Facebook page.

"When you say actions, it's gotta be more than dedicating a memorial to a man who has wrongfully hanged years ago. Police violence happens in this city all the time, that's action," Taylor said.