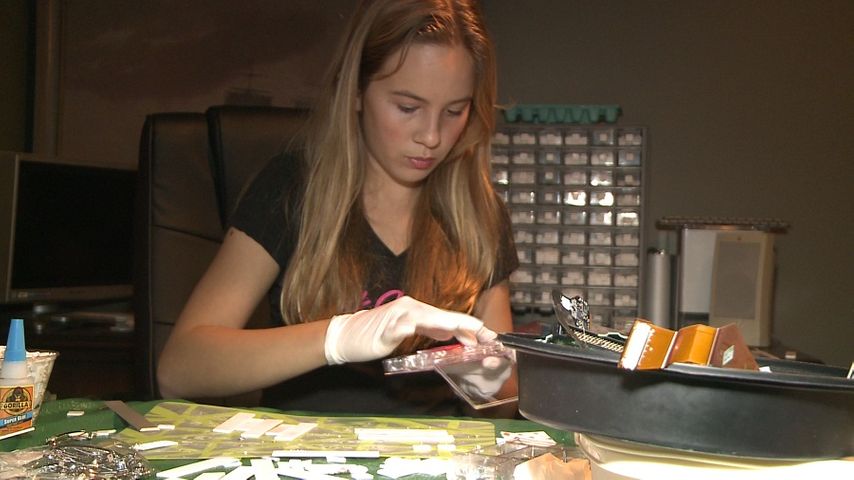 COLUMBIA -  Fourteen year-old Taylor Burghard grew up around computer technologies since her parents own a local Apple retail store, MacXperts. So, it was only natural for Taylor to become another technological entrepreneur, making her own line of jewelry from recycled Apple computer parts she gets from her dad's store.

"Taylor grew up in this shop. She helped me sell her first computer when she was 2 years old. Entrepreneurship is in her blood. So it's very natural that she would become a 4th generation entrepreneur," said Taylor's father, Duane Burghard.

Taylor got the idea to start selling jewelry in April 2011 when her family decided to hold an art contest during an annual recycling drive. The person who had the most creative using recycled computer parts would win. Taylor then started playing with old keyboard keys to spell out phrases or words to put on jewelry.

"I really enjoyed figuring out the messages that I could spell out on the keyboard at first using mainly the control and option keys, just playing around with old parts. I also really had a love for jewelry. So it just seemed like a good opportunity to grow a business from this one idea," said Taylor Burghard.

Taylor sells earrings, keychains, necklaces and bracelets with phrases like "I CTRL U" and "MY option." She also makes brooches from memory chips and other computer hardware.

Burghard signed a contract with a computer computer parts distributor, whose CEO she met through her father, to sell her jewelry nationwide at more than 40 stores.

Managing a business is hard, especially if you still have to go to school. Taylor is a freshman at Columbia Independent School this year.

"Sometimes it's difficult to manage both. But my parents keep me pretty on track with everything," said Taylor.

"She knows that school is the number one priority and she's doing well in school. So I'm not too concerned with the business getting in her way," said Duane Burghard.

Taylor plans to figure out ways to use parts of broken iPhones during her Thanksgiving break.