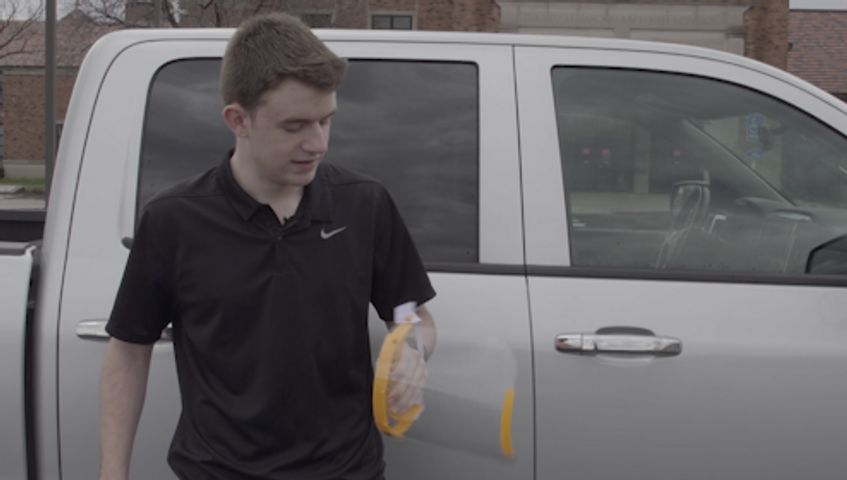 COLUMBIA - A Columbia teen is leading the charge to make face shields for healthcare workers as the nation is facing a shortage of personal protection equipment in the fight against COVID-19.

With his school going online for the semester, 16-year-old high school sophomore Konnar Jones is spending most of his time in his basement.

“I just saw there was a need for it in the community and really in the world and the country,” Jones said. “I knew that nobody else was going to step up to it. So I was just going to go for it.”

Jones said his interest in science began when he was a child building things with his dad, Columbia Police Chief Geoff Jones. He began 3D printing when he was in 5th grade.

Since then, 3D printing has become something of a profession for Jones, working along the way for paying clients. Now, his talents have taken on a higher level of significance.

Jones said he’s learned much of what he knows from Craig Adams, the executive director of Columbia STEM Alliance.

Jones found a computer code online that can be used to 3D print a face mask. Jones, however, re-engineered the code to improve it. His goal now is to use the new code to print 5,000 face shields for healthcare workers.

“It’s very rewarding that I have the tools to be on the cutting edge of things, just to be ahead of whatever we're going to face,” said Jones.

Jones is making both face shields and face masks. But due to regulatory restraints, Jones is unable to provide the masks to hospitals since they need to be certified by the National Institute for Occupational Safety and Health, a process which can take months. Instead, Jones is hoping to make the equipment available to first responders.

“It's a little frustrating,” said Jones. “We've had it tested by the fire department and it passed a fit test, which is similar to some of the testing that they do for the N95 masks, which are in a pretty big shortage right now, but this is still considered a last resort thing by the CDC.”

Manufacturing healthcare equipment and being a high school student is an odd combination. One that comes with inherent obstacles.

Jones said he is now only getting 3 to 4 hours of sleep each night because of the new workload.

“Konnar’s full-time job is being a high school student. We’ve got to remember sometimes that this kid has to go do homework. He’s got to go do his English, his math and so on,” Adams said.

Jones said the process for producing the equipment is challenging. Printing a single mask can take up to 4 hours. When he is finished printing, he is constantly evaluating the design and working with local partners to ensure it fits their needs.

Columbia Public Schools has made some of its 3D printers available for Jones to meet his goal.

Adams said Jones can make up to 30 masks per day, but they want to make even more. They ask any makers with 3D printing capabilities to contact Craig Adams at craigadams1965@gmail.com