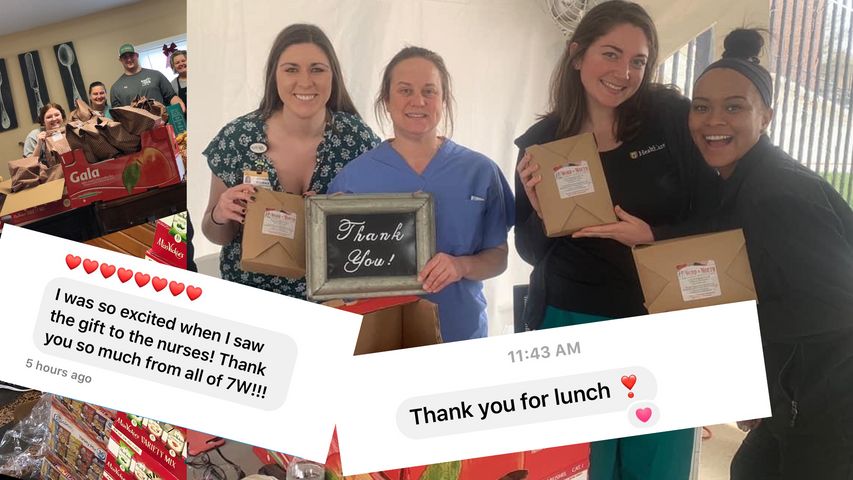 ASHLAND – Thanks to a community grassroots effort, dozens of local medical workers on the frontlines of the COVID-19 pandemic are a little less hungry.

It began with a simple idea.

“My husband and I were continually thinking it would be so fun if we could treat the people at the testing sites,” Ashland resident Lisa Finn said.

She wanted to give them some free meals. She first brought the idea to a Columbia restaurant, but was told it wouldn’t be possible.

“And then I thought of Word of Mouth Catering, because they do such a good job here in Ashland,” Finn said.

She made contact with Word of Mouth’s owner Bridget Canaday and her business partner Rachel Pounds.

“I told her, whatever you guys decide you can donate, Rachel and I will match that,” Canaday said.

But they didn’t stop there.

“I thought, what if I can get other people to donate too,” Finn said.

Canaday was on board.

With that, the group set out to get more people on board. They texted friends, posted to social media and called neighbors.

“No sooner, I swear, had I gotten it out of my mouth, then my neighbor was at my front door with a check,” Finn said.

With that, they got to work. Finn made some phone calls and coordinated with the people in charge of the testing operations.

But the support kept coming.

On Tuesday, Canaday was able to feed 10 times as many workers.

“We ended up preparing and delivering 250 meals to the MU Health Care facility,” Canaday said.

She made it a point to deliver meals to the testing facility first.

“They were so excited,” she said. “They posted a picture with their meals and a thank you note and it was really sweet.”

With their initial goal achieved, and exceeded, Canaday and Finn said they’re ready to do it all again.

“People really were appreciative,” Finn said. “I feel like I didn’t do anything, and I got back way more than the effort that I put out. It’s something to put a smile on your face.”

For them, what started as a small idea grew into much more than an opportunity to give back.

“The thing that I would say I’ve learned or was reminded of is that 99.9 percent of the people around your community, in your neighborhood, are super, super grateful,” Canaday said. “That—in itself—is gratifying.”