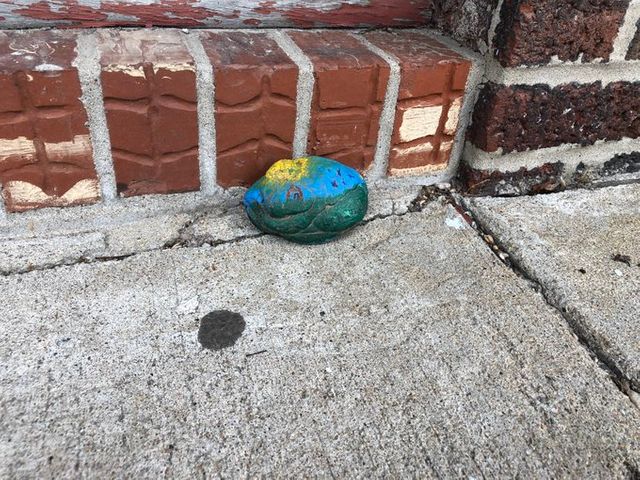 FULTON – Jess Carneal works about 40 hours a week at Brooklyn Pizza in Fulton. But when he’s not working, he’s probably painting rocks.

Since starting his new hobby earlier this month, he said he has painted and hid 10 rocks along Court Street in the Brick District. About six have been found.

“It’s really cool, because it’s like you get to share the time you spent on that rock,” Carneal said.

The 22-year-old said it’s especially important as so many people are going through hard times caused by the COVID-19 pandemic.

“If they’re having a bad day…they’re walking down the street and find a rock, it just makes their day,” Carneal said.

He said he first learned of painting rocks in his hometown, Raytown, Mo., but wanted to bring the idea to mid-Missouri. He is part of a Facebook group – Fulton Rocks!

Carneal said he uses acrylic paint to make sure the paint can withstand any kind of weather. He has designs of Mickey Mouse, landscapes, multicolored patterns, flowers and more.

“There’s some I’ll do and have an idea for it because of the shape of the rock,” he said. “There’s also times where you just want to paint whatever – go abstract…blow off some steam.”

He said if you find a rock, you can either keep it or re-hide it, yourself. But if you choose to keep it, you should paint one for someone else.

“If I find a rock that makes my day or brightens my mood up, I feel like I should do the same – paint a rock and try to do the same for someone,” Carneal said.