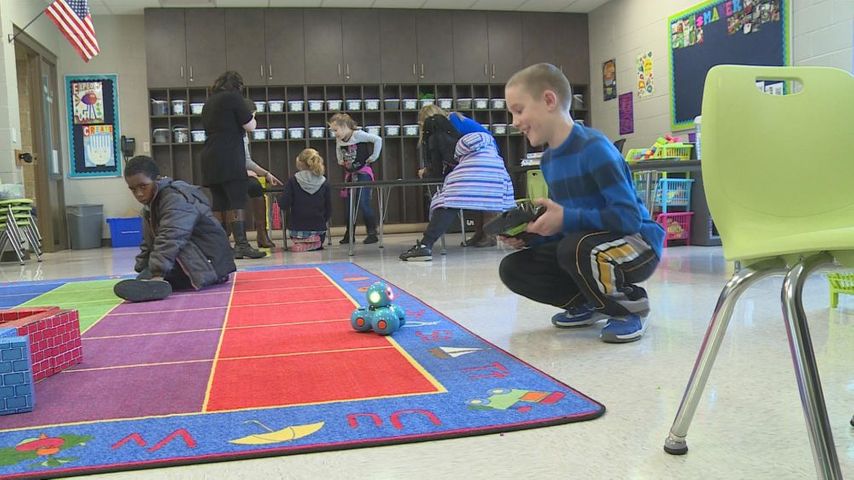 COLUMBIA – Some Columbia elementary schools are expanding their libraries to include makerspaces filled with equipment like 3D printers, robots and more.

In the area at Eliot Battle Elementary, the definition of the word ‘makerspace’ is scrawled on the board. It reads, “Makerspace: a place people get together to make things!”

According to Johannes Strobel, a professor at MU’s School of Information Science and Learning Technologies, makerspaces do more than allow students to make things.

“If they understand the process of making something, it makes them much more aware of the interactions in the world,” he said.

Strobel focused his makerspace research on students in prekindergarten to fifth grade because, he said, students often lose interest in subjects like math, at an early age. He said makerspaces can help keep young students engaged.

“It’s one thing to learn or to read something in a book or for someone to stand up and tell you about it, but we all know the best way to learn is by doing,” said Kristen Burkemper, the media specialist at Battle elementary.

Third grader Aubrey Gordon chooses to spend some of her recess time in the makerspace playing with circuits, Legos and more.

“We get to make stuff that’s really cool and try out new things that some people don’t even know how to do,” Gordon said.

But the students aren’t the only ones learning. Burkemper said teachers are too.

Burkemper didn’t receive any formal training for the 3D printers and other technical equipment in the makerspace. She said she tries to learn three things about any new makerspace technology on her own before letting the students discover the rest.

MU’s College of Education has a makerspace where teaching students can explore.

Battle Elementary has extra room to use as a makerspace. But other schools, like Mill Creek Elementary, are using their media centers to house makerspace equipment.

“It’s not about the space. That’s super important,” Burkemper said. “You don’t have to have the space, and you don’t even necessarily have to have all these expensive tools.”

For one of Burkemper’s student, Aniya McClain, it’s the simplest activities that prove to be the most fun.

“I think my favorite thing is when we got to play with the Legos, because we just got to be free, and I like to build with Legos a lot. And I liked all the colors,” McClain said.

Students at Battle Elementary use the makerspace during class, at recess and after school.