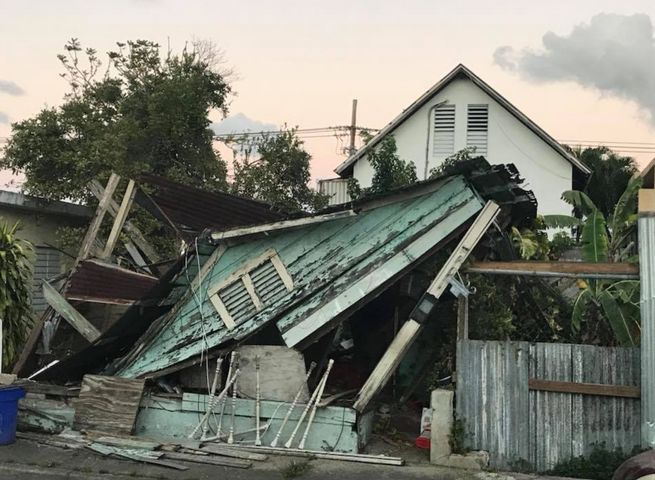 An excavator clearing debris--trying to solve one problem--caused a larger problem when it damaged a major transmission line on the island.

According to the power authority, the outage could last between a day and a day-and-a-half. The first priorities for power restoration include hospitals, airports and banks.

PJ Wilson, a central Missouri man and co-founder of renewable energy group Renew Missouri, has been on the ground in Puerto Rico since last fall.

"I raised a little bit of money and brought down two suitcases full of solar kits and tried to see if I could be helpful," Wilson said. "Turns out, I could."

Through his non-profit Solar for Puerto Rico, Wilson has been working to introduce sustainable, resilient energy systems and bolster solar energy access on the island. He has traveled throughout rural Puerto Rico, delivering and installing solar battery kits that can support basic energy needs for families.

The kits cost $60 apiece and can be used to power lights, cell phones, fans, radios, and other devices that use a USB connection.

Solar for Puerto Rico has given away 500 of those kits, and 500 more kits have been funded and are on their way to the island.

On Wednesday, Wilson spoke with KOMU8 from San Juan, where residents were several hours into the power outage.

He said progress has been slow in Puerto Rico. In San Juan, things are getting better, but in the remote areas of the island, the damage is still very apparent.

"If this was any other place in the country, then the resources would have been there to clean things up, and life would be back to normal," Wilson said, referring to complaints US officials have not prioritized the island territory.

Wilson said power shortages weren't uncommon on the island, even before the hurricane.

"Puerto Rico has the second highest electric rates in the country, behind Hawaii, and at least in Hawaii, their grid works," Wilson said.